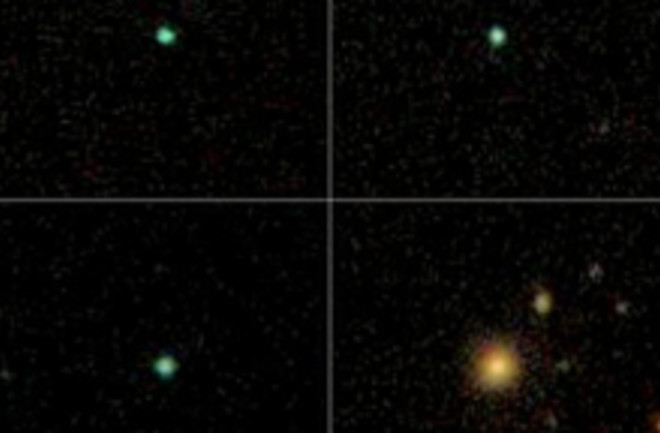 Volunteers helping astronomers classify galaxies in an online project have identified an entirely new type of galaxy, which they dubbed "green pea" galaxies due to their resemblance to little green legumes floating in space. The citizen scientists who had noticed the oddities, and who came to call themselves the "Pea Corps" and the "Peas Brigade," began to discuss the phenomena on an online forum, and soon enough professional astronomers with links to the project confirmed that the volunteers had found a never-before-seen type of galaxy. Says astronomer Carolin Cardamone:

"No one person could have done this on their own.... Even if we had managed to look through 10,000 of these images, we would have only come across a few Green Peas and wouldn't have recognized them as a unique class of galaxies." Of the one million galaxies that make up the image bank, the researchers found only 250 Green Peas [SPACE.com].

Cardamone and her colleagues wrote up the results, which will be published in the Monthly Notices of the Royal Astronomical Society. In the Galaxy Zoo project, volunteers help

professional astronomers classify galaxies, as in: this one’s a spiral, this one’s elliptical, this one’s weird. The green-pea galaxies galaxies were, if not weird, at least interesting enough to generate lots of comments from different Galaxy Zoo volunteers picking them out from different sets of galaxy images [Christian Science Monitor].

Further study by the professional astronomers revealed that the galactic peas lie between 1.5 and 5 billion light years from Earth, and they do indeed have some odd characteristics. The green galaxies are much smaller and less massive than the Milky Way, but they're much more productive. By analyzing the light from the peas, Cardamone found that they are

forming stars at an enormous rate — about 10 times faster than the Milky Way. Spectra of the galaxies taken by the Sloan Digital Sky Survey — the source of the online images — indicate that the greenish hue comes from the glow of ionized oxygen gas heated by newborn stars [Science News].