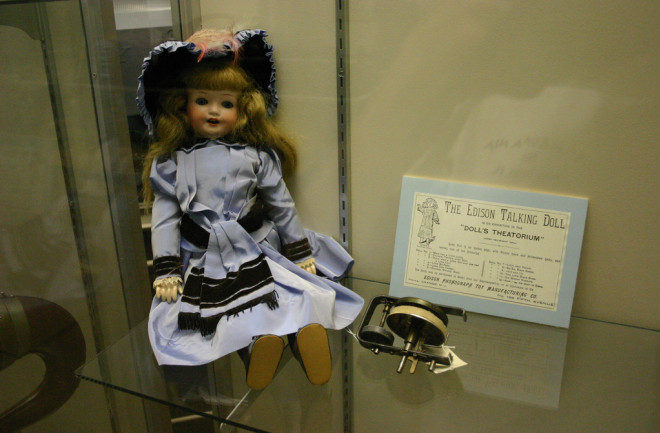 Did you know Thomas Edison’s phonograph company manufactured a line of talking dolls in 1890? Probably not, since the dolls were a complete flop — production only lasted six weeks.

But in terms of historical significance, the wax cylinders that stored those voices represent the first entertainment records ever produced. However, collectors have been loath to play those phonographs for fear they would damage the historically significant artifacts.

But thanks to new technology, Edison’s dolls are creeping the world out all over again. Seriously, turn the lights off, turn the volume up and listen to an Edison doll recite, “Now I lay me down to sleep”:

Listen in: It's Only Science - Now I Lay Me Down to Sleep

The Edison dolls, at the time, were a pretty ambitious step forward in terms of noise-making toys. Prior to Edison’s dolls, talking toys relied on a manual mechanism — a spring that sounded like frog’s croak, for example — to produce a sound.

Edison, who invented the phonograph in 1877, brought a similar technology to toys, recording voices onto wax cylinders instead. Since these creatures were straight out of a nightmare, very few were manufactured, but they still represented mankind’s first recorded-audio product designed and sold for home entertainment.

Robin and Joan Rolfs owned two of theses rare dolls, the New York Times reports, but they never heard their voice. Because the cylinders were made of wax, the Rolfses were hard-pressed to find a way to play the voices without damage.

Advancements in audio recovery technology have made it possible to hear them again. In May 2011, scientists, for the first time, used a scanning system called IRENE-3D to play back an Edison doll’s voice singing “Twinkle, Twinkle, Little Star” without ever touching its tin record cylinder. IRENE-3D works by optically scanning a phonograph’s surface and digitally replicating the sound it would thus produce.

The end result is pretty effective, and you can listen to them courtesy of the National Park Service:

Listen in: It's Only Science - Thomas Edison's Talking Dolls

The nonprofit Northeast Document Conservation Center in Massachusetts has since used IRENE-3D to record many more Edison dolls, including the Rolfses’. To date, there are now eight Edison doll recordings that have been digitized.

For the sake of preserving history, this was an ingenious undertaking. The same can’t be said about the project’s impact on a good night’s sleep.