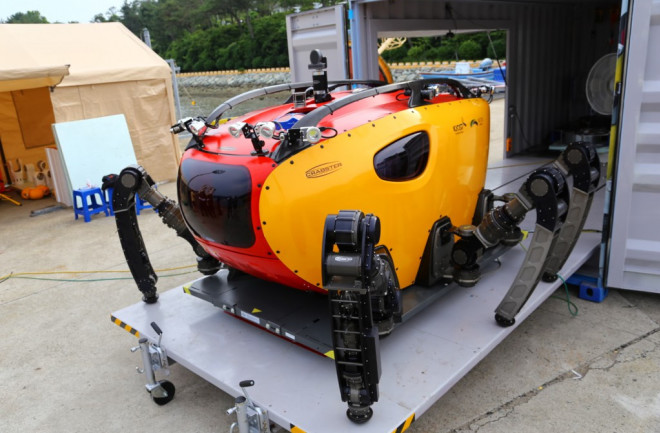 The Crabster prepares for its first dip in the ocean last summer. (Credit: KIOST) To truly see the ocean, scientists must be one with the ocean. This sage-like proverb isn’t printed in any ancient scrolls, but oceanic researchers from South Korea are certainly putting it to practice. Taking a cue from crustaceans that scurry along the ocean floor, researchers from the Korea Institute of Ocean Science and Technology (KIOST) have built and tested a car-sized robotic crab to explore the seafloor. The six-legged robot — with a paint job strikingly similar to the Oscar Meyer Wienermobile — is aptly named the Crabster CR200. The Crabster’s design doesn’t just mimic Mother Nature, it also helps the team from Korea literally see the ocean. Typically, underwater vehicles deployed by researchers utilize propulsion to troll the ocean’s depths, but that method of locomotion stirs up vision-impairing clouds of sediment. The Crabster crawls along the seabed without kicking up pesky sea sediment.

Scientists envision deploying the robot for scientific exploration missions as well as fixing underwater fixtures like pipes used to carry oil and gas. The Crabster is built to offer crisp images of the ocean floor with 11 cameras on board including an acoustic camera to see in murky water. A high-definition camera could allow researchers to closely examine objects picked up by the robot, if the front arms are modified to do some lifting. Researchers envision using the limbs' extendible grippers to perform tasks within 6-foot reach. Crabster may even drop items it picks up into a special compartment to bring back to the surface. Right now, those features are still conceptual and the front pair of legs is just used for walking. The craft uses a Doppler device to gauge the speed and direction of moving water and send location signals to pilots above water. When the sea currents are rough, the Crabster can position its body in a way that prevents the currents from pushing it off course. Currently, the robot relies on an 1,600-foot umbilical cord of power, which limits its range of motion but allows for continuous operation. Crabster’s creators hope to someday equip it with an onboard power source.

Last summer, the crabby craft completed its first underwater mission. This spring, the team from KIOST plans to once again test the Crabster’s prowess on a 650-foot dive before taking it out to explore 12^th Century shipwrecks in the Yellow Sea. In the meantime, check out these videos of the Crabster in action. The first video is from the robot's first aquatic test last summer. The second video is a conceptual animation detailing Crabster's potential abilities.