Could the Boston Bomber Have Fled from Infrared?

Late last Friday a terrible week that began with the bombing of the Boston Marathon came to a satisfying, if somber, conclusion. The last alleged perpetrator of the horrific events at the marathon and MIT was arrested after a most dangerous game of hide and seek. To help bring Dzhokhar Tsarneav to justice, officials took advantage of what is usually invisible to us—heat. 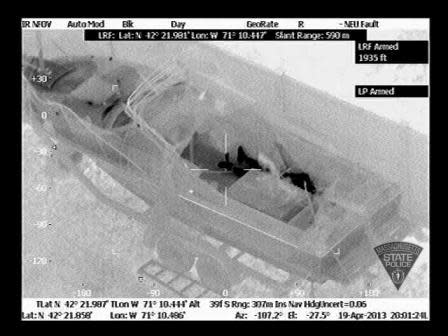 Photos (and videos) like these highlight just how far detective technology has come. Specifically, Tsarneav was indentified with the aid of a FLIR (forward-looking infrared) camera mounted to a police helicopter. But how does this apparent X-ray vision work, and is there any way the alleged bomber could have hid from this seemingly all-seeing eye? What You Don’t See Gives You Away Infrared (IR) radiation is able to make it through a lot of interference like smoke or fog or a boat tarp because it is composed of long electromagnetic waves. Take a look at the electromagnetic spectrum and you’ll see that infrared has longer waves than visible light (right before—infra, beneath—red light). And as we have all seen from thermal images, it just so happens that heat throws much of its energy across the universe as infrared. In fact, if you heat something up enough, these long infrared wavelengths bunch closer together until some bleeds into the visible spectrum. This is why you can heat something up until it “glows red.” Keep heating it and it will glow blue, following the same spectrum. (Note that most of the color thermal images have this scale reversed. This is because it is more intuitive to think of redder areas as hotter.) So when you look at an infrared image, you aren’t actually “looking through” anything. Infrared is just another kind of electromagnetic radiation that happens to make it through the material your camera is focused on. When police “looked through” the tarp of the boat Tsarneav was hiding in, they saw him because his body’s output of long wavelengths were making it through the boat tarp material, not some Superman-like X-ray vision. But because seeing someone or something with infrared requires the radiation to make it through whatever is between it and the camera, there are bound to be materials that effectively block out IR. Slipping behind a material like that makes you invisible to a camera that sees the invisible. Nowhere to Run, One Place to Hide Glass, specifically the kind of glass you have in your home, is designed to block infrared radiation. Keeping in all that heat is important for keeping heating bills down. Point an IR camera at most glass and it will seriously distort, if not completely block, any IR radiation coming from behind it. You’ll get the relative surface temperature of the glass and that’s about it. You can prove this pretty easily. First notice the difference in this video between a car with a window up and a window down in terms of what you can see (the camera is the same FLIR technology used to catch the Boston bomber). Next find a device that puts out near-infrared radiation (shorter wavelengths close to visible light), like your TV remote. The signal it sends is still invisible to you, but I bet you can change the channel through a window. The shorter wavelengths emitted by your remote make it through glass while the FLIR can’t make it past the passenger window. (This is partly why your car gets so unholy hot in the summer; the glass traps the IR radiation!) If Tsarneav wanted to hide from infrared cameras, he couldn’t have picked a worse spot. 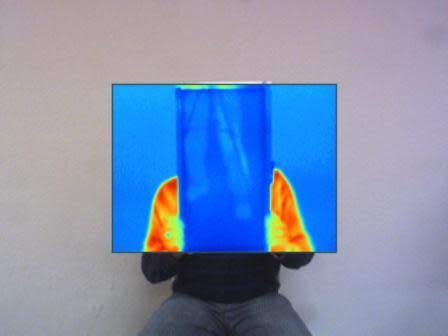 The ideal place to shield your heat signature would be in a glass greenhouse. Surrounded by glass that is designed to reflect heat on all sides, you would be invisible to IR cameras (and Predator). Visible light comes in but IR can’t get out. In fact, this is partly why humans are able to live on this planet. Light from the Sun penetrates our atmosphere, heats up the surface, and then that heat attempts to leave. Greenhouse gases reflect the IR down back at Earth, keeping the heat in—the greenhouse effect. By masking yourself in glass and hiding in an envelop of greenhouse gases, a helicopter like the one used in Watertown, Mass., would be blind. Unless he knew some critical physics, the alleged Boston bomber could have never escaped infrared detection. Of course, knowing how to shield yourself from the seeing eye in the sky has one key disadvantage: putting yourself behind glass puts you squarely back in the visible spectrum. And now he is behind bars. Images: Infrared photos courtesy of the Massachusetts State Police; IR behind glass photo from MoistureView.