Cosmonauts Try a Risky Spacewalk to Fix Their Ship 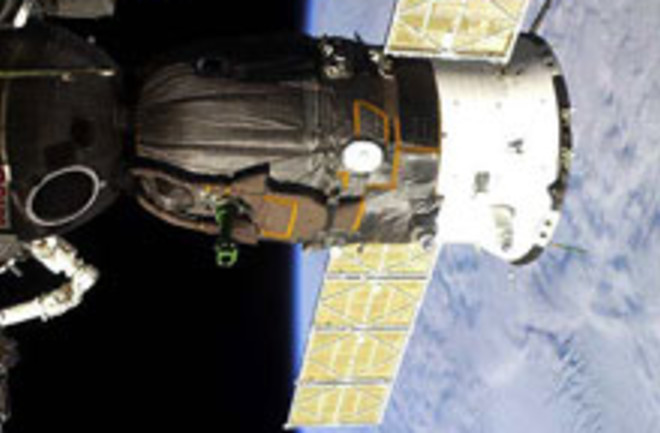 In a daring maneuver, Russian astronauts will take a six-hour walk outside the International Space Station today to remove an explosive bolt from their Soyuz spacecraft. Russian scientists believe the bolt failed to perform properly on the craft's last two entries into the Earth's atmosphere, and want it removed to prevent endangering astronauts on the craft's next trip home later this year. To get to the bolt, astronauts will ride a hand-powered crane from the Space Station to the docked Soyuz, and will thenuse a knife for the first time during a spacewalk to cut away insulation.... [Cosmonaut Sergei Volkov will then] detach an electrical connector before unscrewing the bolt. He will remove the explosive bolt — which has power roughly equivalent to a large M-80 firecracker — and place it inside a stainless steel case that should hold against any unlikely firing of the bolt

.Explosive bolts are often used in spacecrafts to send a component that is no longer needed spinning off into space. In the Soyuz, five bolts fire off the propulsion module during reentry to the Earth's atmosphere. In the previous two descents, scientists believe that one of the bolts did not fire, which left the extra module attached, throwing off the aerodynamics, giving the capsule the aerodynamic properties of a dropped rock as it entered a steeper ballistic entry course.

[The New York Times]. The module burned off during the craft's descent, but because of the late separation the six astronauts aboard the two capsules experienced gravitational forces twice the usual three to four "G's" of a Soyuz landing [Houston Chronicle].

All the space agencies are very interested in getting the glitch in the Soyuz landing system worked out. The Soyuz will be the only spacecraft capable of ferrying astronauts and supplies to the International Space Station between 2010, when NASA retires the space shuttles, and 2014, when NASA's next-generation Orion spacecraft is expected to come online. Image: NASA