Computer Virus Travels Into Orbit, Lands on the Space Station 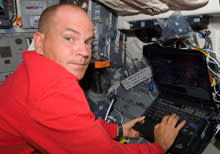 A pesky computer virus that has popped up on computers around the world has now made the leap into space. NASA announced yesterday that several laptops on board the International Space Station were infected with the virus in July, and also admitted that such infections have happened before.

"This is not the first time we have had a worm or a virus," NASA spokesman Kelly Humphries said. "It's not a frequent occurrence, but this isn't the first time." ... NASA downplayed the news, calling the virus mainly a "nuisance" that was on non-critical space station laptops used for things like e-mail and nutritional experiments [Wired News].

The virus was identified as W32.Gammima.AG,

a worm virus that was first detected in August 2007. It copies itself onto computers in order to steal log-on information - including usernames and passwords - for online games. The virus then attempts to send the information back to a central computer [Telegraph].

As the computers on the space station aren't linked directly to the Internet but instead use a satellite data link to transmit emails and information, NASA officials say no data from the on-board laptops could have been transmitted back to Earth-bound hackers. NASA is working with the other national space agencies to determine how the virus infected the space station's computers, which reportedly don't run anti-viral software.

It is thought that the virus might have travelled via a flash or USB drive owned by an astronaut and taken into space. The space agency also plans to put in place security systems to stop such incidents happening in the future [BBC News].

Read about a new idea in anti-viral technology with DISCOVER's "A Vaccine for Your In-Box." Image: NASA