Compressed Air in Underground Rocks Could Be the Next Batteries 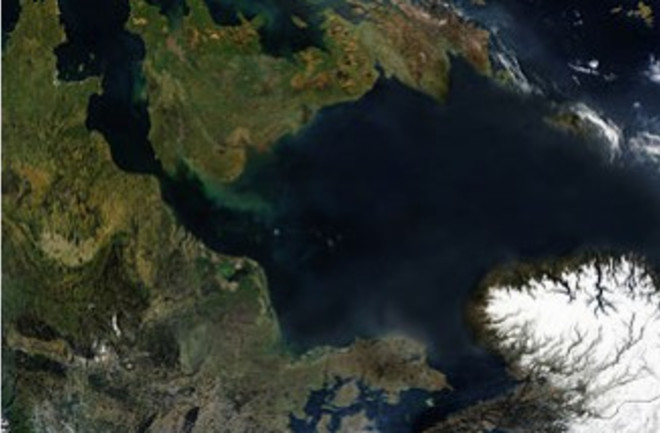 Researchers are pushing for a new kind of energy storage based on compressed air. Using renewable energy, the tech would pump air into underground rocks in the North Sea, and it would power turbines when released. (Credit; NASA)

With reports about climate change becoming increasingly dire, it’s increasingly important to find an eco-friendly way to not only generate energy, but also store it. After all, wind turbines and solar power and the like don’t run steadily. So we can’t just stick that extra energy in a bottle to use when the wind dies down and the sun sets.

Only no, that’s almost exactly what a group of Scottish scientists is proposing. Except, in this case, the bottle is a layer of porous rocks deep within the sea bed, and the energy comes from compressed air. You simply use your renewable energy source to compress and store the air, and then when you need the energy again you pop the cork, so to speak, and let the escaping air drive a turbine that re-generates the electricity. (Thanks to the extreme pressures down there, the air would stay in place, and not escape on its own.)

The researchers unveiled the details behind the plan, dubbed porous media compressed air energy storage (PM-CAES), in a Nature Energy paper this week. It’s a simple-sounding mix of technologies that could seriously make a dent in a country’s energy production — and mitigate the trends that are pushing the global climate to extremes.

Currently this plan is all theoretical — the paper just runs the numbers on the idea to see if it’s at all practical. But boy, does it seem to be.

The authors specifically looked at how a PM-CAES system could work for the United Kingdom, using the sandstone deep below the waters of the North Sea. They looked at existing geological records to model the terrain, and assumed the air “wells” would be physically near to the energy sources they’d be storing — offshore wind turbines, for example.

According to the researchers, it could really work. “Our results show that PM-CAES is a potentially viable large-scale inter-seasonal electricity storage technology, crucial in power systems with over 80 percent of their generation capacity provided by renewable energy sources,” they write. “We find the potential storage capacity is equivalent to approximately 160 percent of the United Kingdom’s electricity consumption for January and February 2017 (77–96 TWh), with a roundtrip energy efficiency of 54–59 percent.”

So this system could, effectively, more than satisfy the entire country’s electrical demand during  two cold winter months, when demand is already about 25 percent higher than in the summer. And because the physical infrastructure involved is mostly just underwater rock — plus a fairly small surface plant to pump the compressed air down and bring it back up to generate electricity — PM-CAES would leave a relatively small footprint, which “would benefit regions with limited land surface or water resources” the authors write.

Of course, there’s always a catch. To get to that level of efficiency, the system would need about 7,000 new wells. That’s no small number, as the authors point out that more than 40 years of oil drilling in the North Sea has produced only about 11,000 wells. But any changes to a country’s power production requires considerable investment.

And lest you worry that it’s all sounding too impractical to carry out in real life, know that the same basic idea of storing air deep underground to turn into future electricity, is already in use: Germany and the U.S. both have CAES energy plants in place that store compressed air in old salt mines. It’s a proven technology.

If we’re going to get serious about curbing the effects of global warming, and lessening the emissions rates of our basic electrical needs, this certainly seems an approach worth considering. The authors point out more research could start selecting specific sites within the North Sea’s rocks, and that no other energy storage technology — from pumped hydro storage to classical batteries — quite works on the scale and efficiency of PM-CAES.

Basically, it’s just a matter of wanting it enough. With any luck, these geoscientists will hit rock bottom before our environment does.