Coming Soon to a War Near You: Robo-Hummingbird Drones?

The next time you enjoy the sight of a hummingbird in a garden, you might want to look twice--because it could be the government's new avian-inspired drone. Dubbed "Nano Hummingbird," this camera-toting, remote-controlled surveillance tool is the latest gadget to fly out the doors of DARPA (Defense Advanced Research Project Agency). http://www.youtube.com/watch?v=96WePgcg37I Commissioned by the Pentagon in 2006 and designed by AeroVironment, this bird-drone's abilities match its $4 million price tag: It flies forward, backward, and sideways, and it can even hover in mid-air. That's not bad for a battery-powered, 6.5-inch long bundle of communication systems and motors that weighs in at two-thirds of an ounce. “We've achieved what our customer asked us to,” AeroVironment Vice President Steve Gitlin told TIME Magazine. But with the robot's maximum speed clocking in at 11 miles per hour, natural hummingbirds can fly circles around this bot. DARPA hopes Nano Hummingbird could eventually be used as an extra eye on the battlefield.

Video shows the drone flying outside and in, successfully maneuvering through a doorway. AeroVironment says it has reached “a technical milestone never before achieved -- controlled precision hovering and fast-forward flight of a two-wing, flapping wing aircraft that carries its own energy source, and uses only the flapping wings for propulsion and control.” [TIME Magazine] 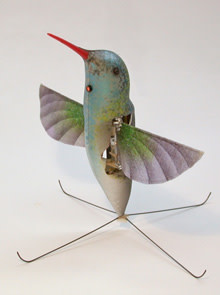 The current model is not without its limitations: it can only stay in flight for 8 to 11 minutes. But that's over 24 times longer than what it could achieve only two years ago.

The next step is likely to be further refinement of the technology, officials said, before decisions are made about whether the drones would be mass-produced and deployed. [Los Angeles Times]

News of this diminutive drone leaves some people both awed and slightly scared:

"The miniaturization of drones is where it really gets interesting," said defense expert Peter W. Singer, author of "Wired for War," a book about robotic warfare. "You can use these things anywhere, put them anyplace, and the target will never even know they're being watched." [Los Angeles Times]

For the time-being at least, you can rest assured, because there is at least one way to tell whether that hummingbird outside your window is indeed all that it seems: just sit tight for 10 minutes and see whether your fluttering friend sticks around or flops to the ground. Related Content: 80beats: When a Hummingbird Goes Courting, He Moves Faster Than a Fighter Jet 80beats: Scientists Glean Secrets of Flight From Birds, Bats, and Bugs 80beats: Pterodactyl-Shaped Spy Plane May Soon Take to the Skies Not Exactly Rocket Science: Anna's hummingbird outflies falcons and fighter pilots Not Exactly Rocket Science: Tobacco plants foil very hungry caterpillars by switching pollinators to hummingbirdsImage: AeroVironment