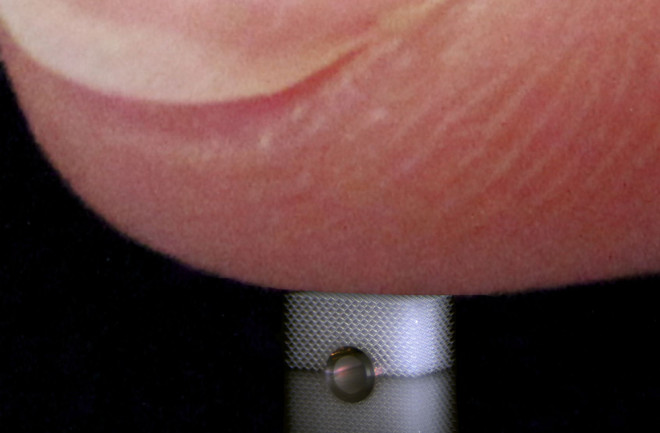 Neither a finger nor a measuring instrument could detect the presence of the object inside the cloaking material. (Courtesy: T Bückmann / KIT) In the popular folktale, “The Princess and the Pea,” a young girl proves her princess-like sensitivity after a pea, inserted beneath 20 mattresses and 20 featherbeds, ruins her night of sleep. But if she had slept atop a thin sheet of scientists’ new touch-cloaking nanomaterial, she would have slept like a rock. Researchers at the Karlsruhe Institute of Technology have created a material that sounds like something from a fictional tale: an elasto-mechanical unfeelability cloak. The polymer-based, scaffold-like structure can mask the presence of an object so it’s imperceptible to the human touch. If you, for example, stepped on a large enough rock, the rubber and foam in your shoe would deform and result in a noticeable bulge. If your shoes were made of the cloaking material, it would disperse the pressure in such a way that you wouldn’t notice the rock beneath your foot. How Does It Work?

The material consists of precisely calculated needle-shaped elements, such that strength depends on the location in a defined way. (Courtesy T. Bückmann / KIT) Researchers produced their metamaterial using 3-D laser lithography to cut and shape needle-shaped cones whose tips meet. These elements were assembled into something that looks like a tiny brick with a honeycomb structure. The size and contact points where the tips meet vary depending on their location, so that objects within the material are imperceptible.  The KIT team tested their material by building a millimeter-sized cloak around a tube in their lab. The laser-cut cones in the cloak closer to the tube had different strengths as compared to cones nearer to the surface, which masked the tube’s presence. They published their findings in the journal Nature Communications.

The tiny test cloak in the KIT team’s lab is purely for research at this point. However, researchers say their metamaterial could be used to make sleeping bags that make disguise the pebbly earth underneath, or rugs that hide the cords beneath them.