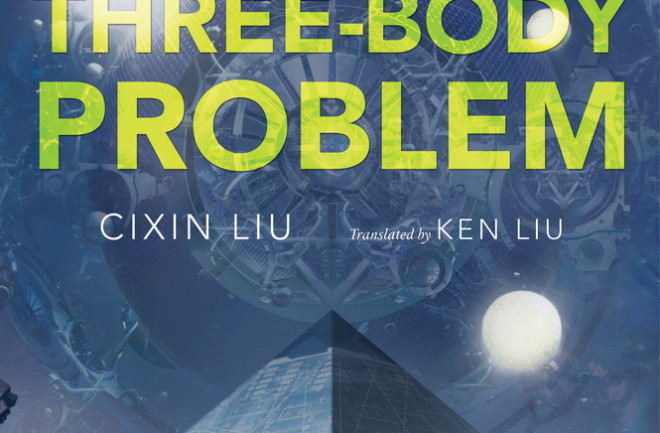 Credit: Tor Books Humanity's first encounter with intelligent extraterrestrial life would undoubtedly have a huge impact on how we see our place in the universe. But could first contact also affect technological progress and spur technology leaps on Earth? That question becomes one of many driving forces in the fascinating "Three-Body" book trilogy by Liu Cixin, a Chinese writer who has become the bestselling author of science fiction in China. Liu's trilogy has steadily gained public attention since the first book was published in China in 2008. A Chinese film trilogy is in the works with the first "Three-Body" film scheduled for July 2016. An English translation of the first book in the trilogy, "The Three-Body Problem, has also made Liu the first Asian writer to win best novel for science fiction or fantasy in the 2015 Hugo Awards. Liu's musings on first contact and technology have even drawn the attention of a certain Silicon Valley CEO, as Business Insider pointed out. Facebook founder Mark Zuckerberg selected "The Three-Body Problem" for his book club called A Year of Books. "I've always felt that extraterrestrial intelligence will be the greatest source of uncertainty for humanity's future," Liu writes in a postscript for the U.S. edition of "The Three-Body Problem." "Other great shifts, such as climate change and ecological disasters, have a certain progression and built-in adjustment periods, but contact between humankind and aliens can occur at any time." That uncertainty fuels "The Three-Body Problem" premise that begins with a secret Chinese military project, called Red Coast, designed to make first contact with extraterrestrials during the Cold War. Part of the Chinese leadership's reasoning comes from a RAND Corporation sociologist's book on how first contact with aliens might translate into economic and technological progress:

This was the theory of “contact as symbol” proposed by sociologist Bill Mathers of RAND Corporation in his book, The 100,000-Light-Year Iron Curtain: SETI Sociology. Mathers believed that contact with an alien civilization is only a symbol or a switch. Regardless of the content of the encounter, the results would be the same. Suppose that the nature of the contact is such that only the existence of extraterrestrial intelligence is confirmed, with no other substantive information—what Mathers called elementary contact. The impact would be magnified by the lens of human mass psychology and culture until it resulted in huge, substantive influences on the progress of civilization. If such contact were monopolized by one country or political force, the significance would be comparable to an overwhelming advantage in economic and military power.

The fictional Chinese leadership also considers the fact that The Search for Extraterrestrial Intelligence (SETI) could have the highest possibility for enabling a "technology leap" in comparison with other research fields such as physics, biology and computer science. That possibility spurs China to invest in Red Coast as a way of competing against rival powers such as the United States and Soviet Union. Such thinking about first contact with extraterrestrials has inspired plenty of real-world thinkers beyond science fiction writers. In September, the U.S. Defense Advanced Research Projects Agency (DARPA) hosted a future technology forum that included a panel titled “Are We Alone and Have We Been?” The fact that the U.S. military organization charged with considering "disruptive" technologies is willing to discuss the possibility of intelligent life in the universe—at a future technology forum no less—shows that the fictional motivations of China's military in "The Three-Body Problem" may not be that far-fetched. "The Three-Body Problem" also provides a unique narrative of first contact set against a Chinese cultural background that is refreshing in the context of Western-dominated science fiction. For example, Ye Wenjie, a woman astrophysicist who represents one of the main characters in the trilogy's first book, undergoes a painful personal journey in the midst of China's turbulent Cultural Revolution in the 1960s and 1970s. That era of destructive ideological programs included state repression of "class enemies" such as intellectuals; a point made very early on in the book when a young Ye Wenjie watches a group of female Red Guards beat her physicist father to death during a public show trial. Ye Wenjie's bitter experiences during China's Cultural Revolution eventually prompt her to make a fateful decision when she works at a Chinese military base called Red Coast; home of a secretive project to establish first contact with extraterrestrials. But most of the book takes place in the modern day with a mystery revolving around a baffling string of suicides among prominent researchers. Another key modern-day subplot in the book concerns a mysterious online game set in a virtual world plagued by intermittent catastrophes. All of this discussion barely scratches the surface of the main story behind Liu's fantastic "Three-Body" book trilogy. I'll have a more spoiler-filled discussion about one of the main plot points in a separate post, but for now I highly recommend checking out the English translations of the first two books in the trilogy. The English translation of the third book, Death's End, comes out in April 2016.