China’s Zhurong Mars rover is about to start exploring the Red Planet. It’s a remarkable feat that previously only NASA has pulled off. 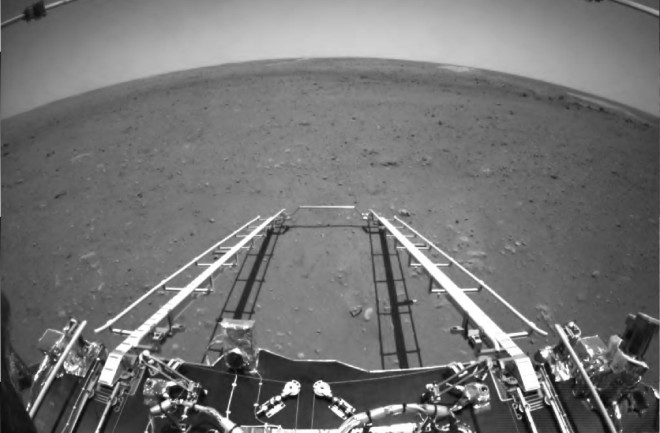 On May 14, a six-wheeled rover the size of a small car plunged into Mars’ thin atmosphere, braking with a series of parachutes and retro-rockets before touching down in a picture-perfect landing. After a 10-month journey through space, the China-built robot could finally stretch out its solar panels and send an all-clear signal back to Earth. As the news reached the Beijing Aerospace Control Center in the pre-dawn hours, bleary-eyed engineers erupted in thunderous applause.

The Mars-bound Tianwen-1 spacecraft launched back in July 2020 carrying both a Mars rover and orbiter. It reached the Red Planet on February 10, about a week before NASA's Perseverance rover arrived. Ever since, the Chinese orbiter has been circling Mars, scouting out the best landing site for the rover to carry out its mission.

With its successful touchdown, the Zhurong Mars rover, named for an ancient god of fire, has now vaulted China into the hallowed ranks of nations with a multi-planetary presence. It's also sparking calls for increased NASA funding as the U.S. sees increased competition in outer space.

Space historians cite both the U.S. and the Soviet Union as the only two countries to softly land spacecraft on Mars. However, the USSR’s Mars 3 mission in 1971 — a ski-bottomed rover — lasted a few seconds before it ceased communications. That still leaves China as just the second country to properly land and operate a mission on Mars.

"You were brave enough for the challenge, pursued excellence and placed our country in the advanced ranks of planetary exploration," said Chinese leader Xi Jinping, according to reporting by Reuters. "Your outstanding achievement will forever be etched in the memories of the motherland and the people."

Just hours after China released the first images from its new rover on Wednesday, May 19, NASA Administrator Bill Nelson held up one of the photos during a U.S. Congressional hearing and called for more funding. He asked for billions of dollars in additional funding for NASA's Artemis mission, which aims to return humans to the Moon.

[China] is a very aggressive competitor,” Nelson said at the hearing. “They’re going to be landing humans on the Moon. That should tell us something about our need to get off our duff and get our Human Landing System program going vigorously.”

China's feat on Mars caps a decade-long leap to the forefront of space exploration. And while the journey to get there was shockingly short for a space agency, it hasn’t been without challenges.

Back in November 2011, Chinese scientists stood at the Baikonur Cosmodrome in Kazakhstan and watched as an ill-fated Russian Zenit rocket launched their first Mars mission, Yinghuo-1.

China’s fledgling space program was riding high at the time. In the previous months, they’d put a probe in orbit around the Moon and successfully deployed their first space station. Yinghuo-1 was supposed to extend that reach into the solar system, vaulting China into the ranks of nations with a multi-planetary presence. The spacecraft’s mission was to monitor the Red Planet from orbit and deploy Russia’s Phobos-Grunt mission, which aimed to return soil samples from Mars’ moon Phobos.

Instead, the Russian rocket lost control and stranded Yinghuo-1 in low-Earth orbit.

However, rather than pulling back from space exploration, the China National Space Administration redoubled its efforts. The space agency began testing Moon landers and deployed a pair of successful lunar rovers, dubbed Yutu and Yutu-2, beginning in 2013. In 2019, the second of those rovers became the first mission to ever successfully land on the farside of the Moon. Much of the technology demonstrated during those missions now lives on in the Zhurong Mars rover.

Regarding space exploration, as it has in many technology sectors, China has moved to become more self-reliant. Just one example is the fact the country now builds its own heavy-lift rockets instead of relying on Russian rockets. That’s how Tianwen-1 and the Zhurong rover reached Mars.

“Now, China has developed our own large-scale launch vehicle Long March 5, as well as our own deep-space monitoring network, so that we can launch Tianwen-1 with every step within our own control,” scientific payload subsystem director Chi Wang said in an interview with National Science Review, a journal from the Chinese Academy of Sciences. “So, my strongest feeling over these years has been that we must rely on ourselves for the development of science and technology.”

In 2019, China became just the third country (behind the U.S. and Russia) to launch satellites into orbit from a platform at sea. (Credit: Courtesy Xinhua News Agency)

A New Space Race With China

China is just getting started, too. Like NASA, China has plans to return a sample from Mars in the coming decade or so. The Chinese space agency also recently deployed the core module of a new space station in low-Earth orbit, called Tianhe.

As NASA ramps up its presence at the International Space Station thanks to SpaceX’s Crew Dragon capsules, China is likewise about to accelerate its human spaceflight efforts. Later this month, they’ll start sending supplies ahead of two planned astronaut crew launches to Tianhe in the summer and fall. The missions should help China get astronauts to Moon in the years ahead, where they plan to collaborate with America’s long-time space partner, Russia.

And just in case that's not enough, China is even planning a mega-constellation of satellites to take on Elon Musk’s Starlink internet system.

All this action is sparking headlines about a new era of space competition. But instead of facing off with Soviet Russia, the race pits both the U.S. Government and the burgeoning private spaceflight industry against communist China. That has Western defense experts worried over the long-term strategic implications.

“Beijing is working to match or exceed US capabilities in space to gain the military, economic, and prestige benefits that Washington has accrued from space leadership,” the Office of the Director of National Intelligence said in its Global Risk Assessment report in April.

On the science side, China’s new Zhurong Mars rover could actually help deliver fundamental breakthroughs in our understanding of the Red Planet.

As soon as this weekend, Zhurong will start exploring an area of Mars called Utopia Planitia. Astronomers have wanted to revisit ever since Voyager 2 spent several years active there in the late 1970s. Utopia Planitia is the largest known impact basin on Mars, as well as in our solar system. The terrain is full of interesting geological features and shapes that scientists would like to better understand.

Studies have also shown it is home to a frozen subsurface lake larger than New Mexico that holds about as much water as Lake Superior, Earth’s largest freshwater lake by surface area. All of that makes Utopia Planitia a prime place to explore. Scientists working on the mission could make new discoveries about everything from the prospects for Mars’ life and subsurface ice, to impact craters, sand dunes, and mud volcanoes. Like NASA’s Perseverance rover, Zhurong will also stash a Mars soil sample that China eventually hopes to retrieve.

The road ahead for Zhurong won’t be easy. Chinese space agency officials say that the rover landed in an area riddled with rocks and more craters than expected. However, engineers think the rover should be able to handle exploring the region.

China says it expects the rover’s mission to last just 90 days on Mars. But the space agency said the same thing when its Yutu-2 lunar rover landed on the Moon in 2019. Yet, that rover is still alive today. If previous NASA’s missions are any indication, Zhurong could survive much longer on Mars. The Mars Opportunity rover’s initial 90-day mission ultimately lasted more than 14 years and took it across some 28 miles of terrain.

And even if Zhurong doesn’t live up to the lofty legacies of Spirit, Opportunity, and Curiosity, the rover has already succeeded where so many Mars spacecraft have failed in the past.