Check Your Inbox, You May Have an STD 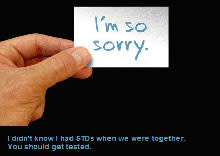 For many people diagnosed with a sexually transmitted disease, notifying past sexual partners of their health risk is a task that's just too humiliating to face. That's why the inSPOT service was created four years ago, a new report explains. With just a few clicks, people can send an anonymous (or signed) e-card to past partners, letting them know that a trip to the doctor is in order. The email includes links to health clinics and STD information, and no information about the sender or the recipient is collected. The project began when Dr. Jeffrey Klausner of the San Francisco Department of Public Health got together with the tech-savvy nonprofit Internet Sexuality Information Services (ISIS), and brainstormed ideas for a response to an STD outbreak in the gay community.

"In 1999, I discovered an outbreak of syphilis related to an AOL chatroom," Klausner said. Just a year before, San Francisco had eight cases of syphilis a year. By the end of 2004, Klausner said, the city had 550 reported cases. After tracing the outbreaks to the chatroom, Klausner and colleagues at I.S.I.S. Inc decided to use the same type of communication that facilitated the hook-ups to help resolve the situation [ABC News].

Klausner surveyed the gay community, and

The site launched in San Francisco in 2004 and has since been adapted by 8 other major cities and 9 states; it now also targets heterosexuals. A report on the site's progress published in the journal PLoS Medicine states that over 30,000 people have since used the service to send almost 50,000 e-cards.

ISIS says that 19 million new STD cases (including 900,000 cases of Chlamydia, 330,000 cases of gonorrhea, and 55,400 estimated new HIV infections) are diagnosed in the U.S. annually. The researchers stress that notifying potential sufferers is a crucial step toward preventing new cases [Scientific American].

ISIS now is working on rolling out the e-card service for all 50 states. Image: ISIS Inc.