In recent years, health-tracking wearables have become ubiquitous. What if we could use these devices to track the health of our romantic relationships and prevent conflicts? 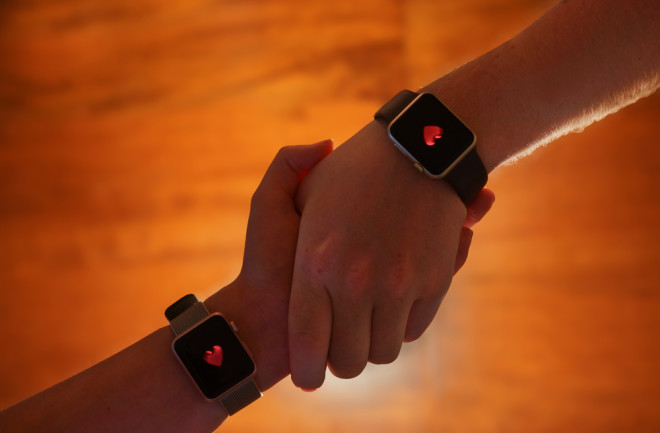 Wearables have revolutionized how we track our physical health; they let us effortlessly assess the steps we’ve walked, the miles we’ve biked, the hours we’ve slept, and how fast our hearts are beating. But in the future, wearables might also let us track — and improve — the health of our relationships.

By picking up on physiological factors like heart rate and sweatiness — as well as analyzing the tone and content of what people are saying — wearables equipped with the appropriate algorithms are making strides towards detecting what people are feeling and assessing interactions between romantic partners.

In one study, researchers monitored couples during conflict discussions. They measured speech patterns, including pitch and vocal intensity, as well as electrodermal activity — the minute increases in perspiration that occur when we’re excited or anxious or angry and the decreases that occur when we’re calm and content.

After the couples engaged in a heated discussion, the researchers plugged these measurements into a formula to get scores for vocal arousal and physiological arousal. Everyone had increases and decreases in arousal during the discussion, but some people’s scores often came back to baseline, while others’ scores seemed to diverge from baseline.

Researchers think that coming back to baseline indicates better emotion regulation (which is generally associated with better interpersonal functioning) and in fact, this pattern was associated with greater overall relationship satisfaction. So perhaps wearables that monitor physical and vocal cues when we argue could help inform us about the health of a relationship as a whole.

But the goal of these wearables isn’t just to inform you that you are good or bad at regulating your emotions when you argue or tell you if your relationship is healthy or unhealthy. Adela Timmons, a psychology professor at Florida International University, hopes that wearables can be used to detect when a couple is headed for trouble and intervene before things get out of hand.

Traditional therapy can provide couples with strategies to deal with conflict in a healthy way, but when you’re stressed or angry with your partner, it can be hard not to fall into old patterns of yelling, or shutting down, or bringing up old issues you’ve long since resolved. In your moment of conflict, your therapist isn’t there to help you. You’re on your own.

“You’re in therapy with someone for an hour a week, and that’s like 1 percent, or a tiny sliver of someone’s life,” says Timmons. “If we [psychologists] could be in the context in which the problem is occurring, in the optimal moment… we could potentially do more and be more effective.”

And this is where wearables come in.

“If we can detect [conflict] early — maybe like stress is starting to elevate, but you haven’t completely lost it yet — you can send [an intervention] in a moment of challenge, so there’s still a chance of changing something.” These interventions, says Timmons, could be similar to those used during traditional therapy sessions, including breathing exercises, taking a break to calm down, or doing a communication exercise with your partner.

Early efforts to detect conflict using wearables and algorithms have been promising. In one study of 19 couples, wearables that assessed physiology, vocal characteristics, and language were able to predict an upcoming conflict about 80 percent of the time.

While some companies are building brand-new devices for emotion detection, Timmons wants to keep it simple.

“My philosophy is like meeting people in their lives with the technology that they already have and already utilize,” she says. “So, my hope is to build algorithms for phones and wearable devices that have the greatest market penetration, to build things at scale, and that are relatively inexpensive and that work seamlessly within people's lives.”

Timmons estimates that these conflict detection and mitigation apps could be commercially available in as little as five years. But there are some hurdles that must be overcome first. One problem is that not all couples are the same, so the same algorithm probably won’t work for everyone.

Shrikanth Narayanan, director of the Signal Analysis and Interpretation Lab at the University of Southern California, emphasizes the importance of personalized models. Research has shown that sorting couples into groups based on relationship satisfaction and attachment style can improve the ability of machine learning models to detect conflict signatures from physiological and vocal signals.

Context could be important for the interpretation of different signals as well. Within the same couple, for example, an elevated heart rate could have a substantially different meaning based on whether it occurs while the couple is jogging or watching a scary movie or talking about having children.

Narayanan also says these applications must be designed thoughtfully, with privacy concerns in mind and with input from the people whose data would be collected. “Always, we should be asking if the benefits outweigh the risks,” he says.

Even apps that are supposed to encourage healthy behaviors can sometimes be used in an unhealthy way. Among some people, for instance, using health tracking apps leads to undue stress or even obsessions about diet or fitness.

“Technology in and of itself isn't a good thing or a bad thing, but technology can always have a bad use and a good use. So, whenever something new comes out, there’s a way for it to be misused and then there’s a way for it to be used for benefit,” says Timmons. “I think the best thing to do is be really thoughtful as scientists, and as regulators and as communities about how we build these things so that they are beneficial to our society, but we minimize the dangers that might be involved.”

Narayanan says that this research could also one day help us answer fundamental questions about the nature of human conflict. This research, he says, could help scientists “understand aspects of, not just conflict, but what leads to it? How can you come out of it, what are the different pathways? How can we understand the diversity across people?"

As long as humanity has existed, interpersonal conflict has been a feature of our lives. But now, we might finally have the tools to fully understand it.