Can Video Games Help Sick Kids Stick to Their Treatments? 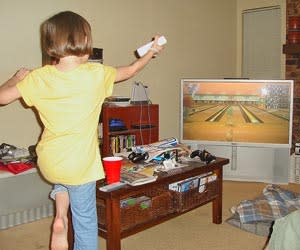 Video games might do more than get you off your fanny.

What’s the News: Getting in shape with Wii Bowling was just the beginning: scientists are now studying whether videogames that use breath as a controller can encourage healthy habits in children with cystic fibrosis. What’s the Context:

Not So Fast: The study was very small: just 13 kids participated. It’s hard to draw any kind of conclusion from so few subjects, and the lack of difference between the control period and the game-playing period suggest that there may be complicating factors that should be controlled for. The Future Holds: Hopefully more, larger studies. While it's always possible that video games really don't have anything to offer cystic fibrosis suffers, if they could be designed and deployed in such a way that they do make a difference in getting kids to adhere to therapy, they'd be most welcome. (via ScienceDaily