Can a Wristband Conquer Speech Anxiety? 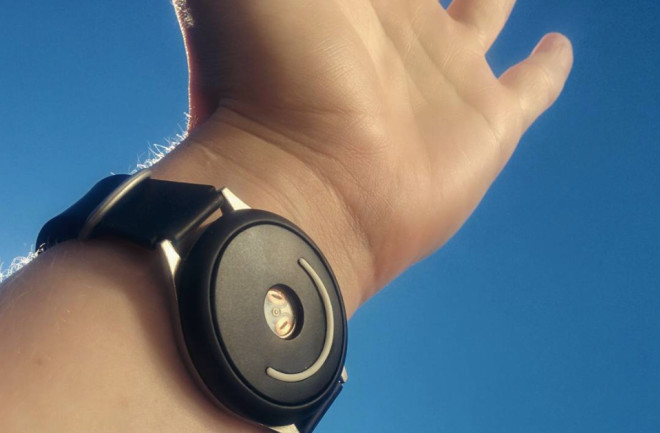 (Credit: doppel) For Americans, public speaking ranks higher on the list of fears than heights, blood, ghosts, clowns, flying, needles and…dying. Indeed, one in four Americans admits standing and delivering before a crowd of strangers is a dread inducing experience. On top of that, it’s hard to get through life without encountering situations that force us to confront this fear in some form, which may explain why it’s so pervasive. As such, there are countless remedies: picture the crowd naked, be yourself, breathe, tell a joke. There’s even limited evidence that a beta-blocker, propranolol, can reduce social anxiety in the short-term. But the designers of the doppel believe conquering your fear of public speaking is as easy as strapping on a wristwatch.

The $179 doppel (coming soon) is a wristband that generates a heartbeat-like vibration when it’s worn. If you want to calm your nerves, set the doppel to “lub-dub” a bit slower than your heart rate; increase the beats-per-minute to amp yourself up before a workout. Back in 2015, doppel designers successfully pitched their wearable on

and raised well over $100,000. Such an elegant, simple solution to stage fright could tilt the scales in favor of the shy and timid competitors in the National Speech and Debate Association. That is, if the doppel works. The results of a recently published study appearing in Scientific Reports indicate that the doppel does indeed work. We should note, four of the six authors of the study are associated with Team Turquoise Ltd., the group of scientists and engineers selling the doppel. Further, it was a study of just 52 participants. Keep that in mind as we dig into the results. They split their group of 52 participants into two groups: one group wore a doppel that was turned off, while another wore a doppel that was set to vibrate at a rate 20 percent lower than their resting heartbeat. Both groups were given a cover story that device was simply to measure blood pressure. Then, they were told to prepare a 5-minute speech about the pros and cons of using lab animals. They were to present it to four of the researchers’ colleagues in just 5 minutes. They never gave the speech, but the speech preparation scenario is a classic method used to induce anxiety. And, sure enough, the participants who wore the doppel displayed a lower electrodermal response—a measure of the skin's ability to conduct electricity—than the control group. A lower response indicates a lower state of arousal. In a self-reported survey, they also indicated they experienced lower levels of anxiety. Would another group of researchers get the same results when they repeated the experiment? Well, that’s hard to say until someone does. However, there is some precedent for modulating our physical and psychological states with rhythms.

Before we’re born, our brains are being shaped by our mothers’ heartbeat, and it’s thought that the “lub-dub” helps the fetus build synchronizing skills that underpin speech and other cognitive processes. In a 2015 study published in Proceedings of the National Academy of Sciences, scientists divided extremely 40 premature babies into two groups: one that was exposed to maternal sounds like their mother’s voice and heartbeat, and another without audio enrichment. The babies exposed to maternal sounds during the month-long study developed a thicker auditory cortex than the control group. A larger auditory cortex has been associated with better hearing and language development later on in life. Our connection to rhythm hardly fades as we age. It’s been demonstrated that choir singers’ heartbeats speed up and slow down at the same rate as they sing in unison. Researchers believe it’s because singers are coordinating their breathing. In general, slower tempo music tends to calm, while high-paced music gets us energized. The heart rates of couples that are deeply in love will match up with one another when they interact intimately. The evidence suggests a deep-seated connection between the body and rhythm. Is the doppel an effective conduit of that power? You’ll never know unless you give it a try (although this is not an endorsement).