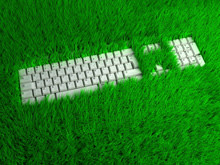 There's a lot of talk about "green jobs" in this election. But for all the questions raised by the phrase—just how many jobs will be generated, where will they come from, how fast will they get here—so far we've had few definite answers. Which is why it's helpful to have at least one state paving the way as an example of how to incorporate energy efficiency and "greening" into the economic scheme, and save money and create jobs in the process. The state in question is California, and according to a new study out of U.C. Berkeley, its planned investments in fighting global warming and improving energy efficiency will create as many as 403,000 jobs and jack up household incomes by $48 billion in the next 12 years. These results are a big jump even from the state's own estimates, which were around 100,000 new jobs and $14 billion in personal income. The key to the mystical "green job," according to the Berkeley study, is reallocation: When people use less energy, they spend less on energy bills, and thus have more cash to spend on other things, like consumer products. Cue economic growth and job creation. So by "green jobs," under this definition, we're talking not only about jobs created by boosting the state's renewable power and alternative fuel companies, but also jobs in other sectors that spring forth because of increased wealth created by lower energy use. The effects of lower energy consumption will be so great, study author David Roland-Holst argues, that they'll happen even if California's planned cap and trade system (a system that's also supported by both presidential candidates) causes electricity prices to rise. Of course, this is all prediction: How things actually go down remains to be seen. But in the midst of all the economic gloom and doom for the green tech sector, it's nice to have a little good news once in a while. Related: RB: Obama & McCain Answer DISCOVER’s Questions on the Environment 80Beats: What Does the Economic Crisis Mean for the Green Tech Sector? Image: iStockPhoto