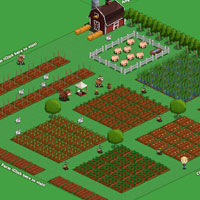 On Facebook, the Farmville updates are impossible to avoid--someone is looking for a cow, someone else is watering their crops. People who have never played the game may not understand how addictive it is, but here's some proof. The game can not only suck away large portions of your day, it can also, as one councilmember in Bulgaria's second largest city found out, get you demoted. While many distracted politicians twiddle their thumbs during meetings or frantically jab at their Blackberries, city councilors in Plovdiv were apparently playing Farmville during budgetary debates. The Escapist writes:

Finally, during a meeting last Thursday, in order to send a message to the rest of the Farmville-playing community, one councilmember was given the boot. Councilor Dimitar Kerin was voted off the budget committee, said fellow councilor Todot Hristov, because "he needed more time for his virtual farm." The Escapist added:

But he's not leaving without a fight. "The troubled councilor has defended himself by saying he was not the only one in the City Hall watering virtual egg plants," according to a report by Novinte.com. "He said he had reached only Level 40, whereas Daniela Zhelyazkova, a councilor from the rightist Democrats for Strong Bulgaria party, was already at Level 46."