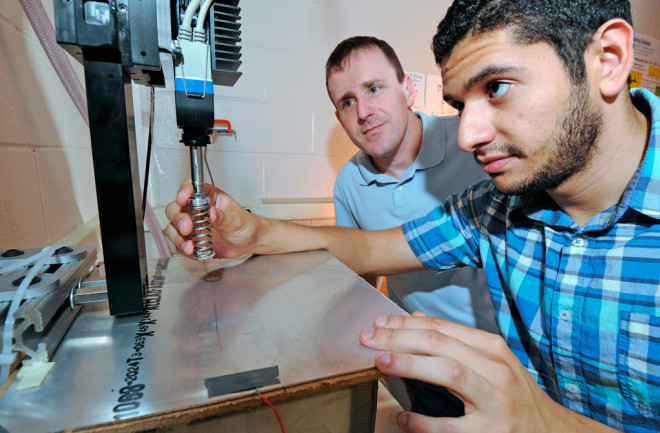 The world has no shortage of great leapers, from hopping kangaroos to high-jumping basketball stars. But according to physicist Daniel Goldman of Georgia Tech, the seemingly simple act of bouncing remains a rich source of research questions. In hopes of designing hopping robots, Goldman and his colleagues first set out to study the physics of bouncing, and in the process they stumbled upon the secret to more effective jumps.

To start, mechanical engineering grad student Jeffrey Aguilar built a simple hopping robot. The device consists of an 8-inch-tall rod with a spring at its base. A motor, which is connected to a computer, moves vertically along the rod. When it travels up, the rod shifts down, compressing the spring. This causes the spring to recoil, thrusting it up off a platform.

Aguilar wrote a program that randomly put the robot through nearly 21,000 different jumps. Each time, the motor’s starting position, its speed and more changed, and the scientists recorded each leap. After sifting through the data, they discovered the robot jumped to the same peak height using two very different techniques.

Click on the image to try this working model. | Georgia Tech

The first involved moving the motor rapidly, which sent more power into the spring. In another variation, the robot started with a small hop, then soared to the same height on its follow-up. This stutter jump, Goldman notes, could potentially conserve energy, requiring 10 times less power.

Goldman suspects that well-known leapers might already take advantage of this energy-saving stutter. After identifying the trick, the group analyzed the 2008 commercial on YouTube of basketball star Kobe Bryant appearing to leap over a moving car. When they looked closely, they noticed that he stutter-hops just before his jump.