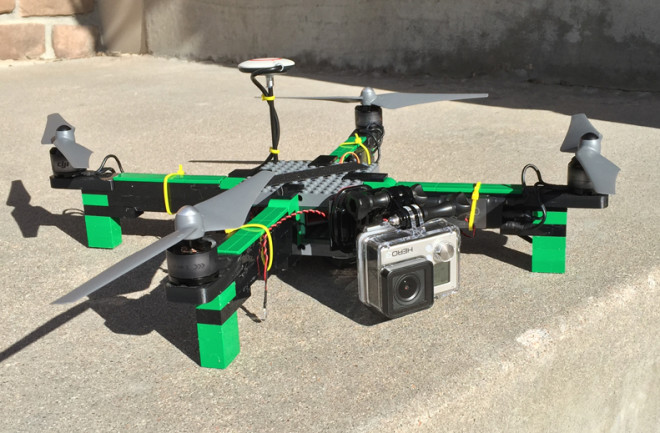 A LEGO drone is ready for some aerial filming. (Courtesy: Ed Scott, Brickdrones) LEGO bricks have a long history as do-it-yourself toys for creators young and old. Drones, on the other hand, are a high-tech DIY hobby just coming into their own. It was only a matter of time before the two were mashed up. Brickdrones is a new company that sells kits with everything you need to build a fully functioning drone from LEGO. Thanks to Brickdrones, adults can relive childhood memories by snapping together the familiar colorful brick pieces, and youngsters can get a hands-on lesson in science and engineering. It’s a win-win!

Back in 2012, Brickdrones’ Ed Scott built a LEGO drone prototype with his entire family, which first took flight in December 2012. In 2013, Scott made their LEGO drone fully autonomous using a 3DR APM flight controller. He was the first to make a fully autonomous drone from LEGO bricks. Since the project was so much fun for Scott and his family, he decided to take his concept to the crowd-funding website Kickstarter. In September 2014, he raised the $6,000 needed to fund Brickdrones. Check out the inaugural LEGO drone flight below:

LEGO bricks — as we all know — are versatile building materials. But in order to build a LEGO bird, Scott need to 3-D print specialized mounts to attach rotors to the frame. Other than that, the rest of the design utilizes out-of-the-box LEGO. The basic LEGO drone kit costs $125 and comes with motor mounts, a GoPro mount and all the necessary LEGO bricks. You will, however, need to purchase your own flight controller, motors, battery, glue (yes, you need to glue the pieces together) and other items. Fortunately, Brickdrones does supply full assembly instructions and a list of recommended parts to get you started.

The "crew" readies a LEGO drone for flight. (Courtesy: Ed Scott, Brickdrones) Scott’s LEGO drones have appeared on FOX13 in Tampa Bay, as well as a fourth- and fifth-grade classroom near his home. Selling LEGO drone kits is just half of Scott’s overall mission. Scott plans to use the extra project funding to “help others create and build their own drones, expand their education in robotics, construction and software development,” according to their Kickstarter page. LEGO is in toy aisles, on the silver screen, and in video games — why not take the little yellow guys to the sky?