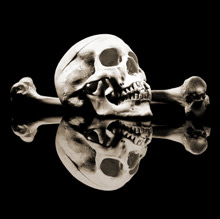 Last week a band of Somali pirates hijacked a Saudi Arabian tanker in just 16 minutes using Kalashnikovs and rocket launchers. This was just one of around 100 attacks in the area this year—leaving plenty of fear that the pirates are on their way to sabotaging one of the most important sea trade routes in the world. But the days of pirate victories may soon be over, thanks to a little scientific ingenuity. A British company called Anti-Piracy Maritime Security Solutions thinks the outlaws can be taken down using none other than a high-tech "sonic laser." Their plan is this: Hook up a long-range acoustic device (LRAD) to an MP3 player, and raise the volume to painful sound levels whenever pirates approach. The noise from the satellite dish-sized LRAD can get so loud that it causes permanent hearing damage. If threatened ships blast oncoming pirates with "precise beams" of warning messages, sirens, etc., it could be enough to cause "absolute agony" to any ambitious pirates, according to APMSS chief executive Nick Davis, and could make them turn back. While anti-pirate sound doesn't come cheap—the team and equipment costs $21,000 for three days of use—the technology is in high demand, with APMSS sending 10 teams out on on ships in the Gulf of Aden this week. Let's just hope they're armed with good ear plugs. For everything you'd ever want to know about what’s going in pirate attacks, check out the Weekly Piracy Report. Related: Say What? Japanese Whaling Ships Accuse Animal Planet of EcoterrorismChatting With Aliens? Researcher Aims to Create Alien TranslatorBetter Meat Through Bach: Classical Music Makes Piglets Less StressedImage: iStockPhoto