Bringing Robots into the Classroom

Inexpensive (and cute!) machines can work wonders as teaching tools. 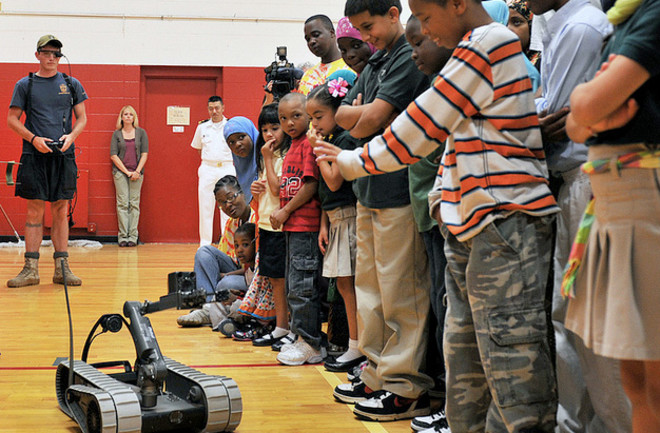 Something cute and pocket-size is showing up in schools all over the world this fall. No, it’s not Flat Stanley. It’s Sparki, the newest robot from ArcBotics.

In 2011, ArcBotics co-founder Joe Schlesinger decided to develop relatively inexpensive robots as teaching tools. First off the drawing board was Hexy the Hexapod, which, among other things, marches, dances, waves and types (after a fashion; it will hit the same two keys over and over).

Following in Hexy’s six-legged footsteps is Sparki, which can react to light, draw its name on a sheet of paper and tote up to 10 pounds on its back, if the weight is balanced correctly.

Drag-and-drop programming, enabled when Sparki is hooked up to a computer, makes it easy for kids to learn the basics of how human commands translate into robot actions.

“Our goal is to get kids who don’t really know electronics or robotics to interact with it and get them to trust in science,” says Schlesinger.

Setting a modest goal of $13,000 on Kickstarter for Hexy, Schlesinger and co-founder Connie Hu raised more than $168,000. Using the same fundraising model for Sparki, they garnered $188,786. Sparki went into production in June and was scheduled to arrive in classrooms in October.

Sparki is suggested for ages 11 and up, but Hu notes it’s user-friendly enough to teach (and entertain) any school-age child.

“Take Sparki out of the box, and he’s ready to go when you plug him in via the USB port on your computer,” says Hu.

Sparki’s “arms” may be a mere inch long, but his reach is worldwide. Pilot programs are already set up in schools from Mexico to Norway. Tutorials and individual classroom lesson plans will be available for anyone purchasing the ‘bot.