Brain in a Dish 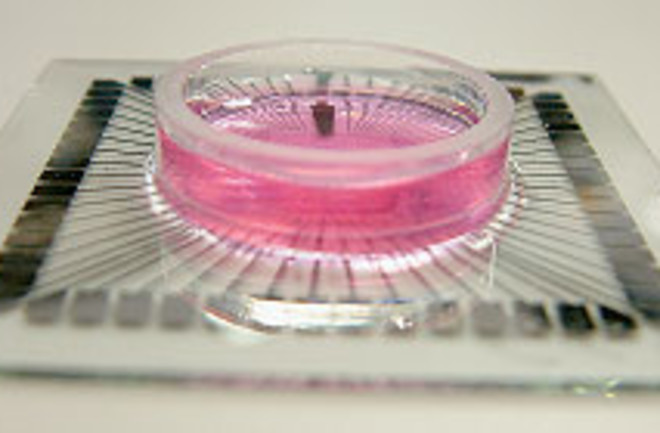 The pink liquid in this inch-wide dish supplies nutrients to a living network of rat cortical neurons. | Courtesy of Megan Gale

The nose of an F-22 jet fighter in a computerized flight simulator tips up, then down. The maneuver seems routine, even rudimentary. But in this case the aircraft is piloted by 25,000 rat neurons in a tiny dish, hooked to an electrode array hardly bigger than the head of a pin.

The experiment in Thomas DeMarse’s biomedical engineering lab at the University of Florida is a breakthrough in efforts to understand—and someday duplicate—how a living brain processes information.

The neural cells, plated onto an array of 60 electrodes attached to a computer, are nourished in a small dish until they grow connections between one another. They then receive electrical pulses from the virtual F-22 that are timed to correspond to the angle of the plane’s nose as it points above or below the horizon. “The timing determines how much of an effect you have on the conductivity within the network, and that modifies it,” DeMarse says. Signals generated by the neurons affect the behavior of the plane. This then changes the timing of the pulses and again alters the neurons’ response, forming a feedback loop—a simple form of learning. “Gradually, you see the thing start to control the aircraft,” he says, “to actually point the nose back toward the horizon.”

DeMarse’s long-term goal is to produce computer software algorithms that mimic the functioning of the brain. One possible application is face recognition, which the brain does remarkably well but conventional computers cannot master. “If we learn how the neurons perform their computations,” DeMarse says, “we can extract those rules and build systems that are much more intelligent than they are now.”