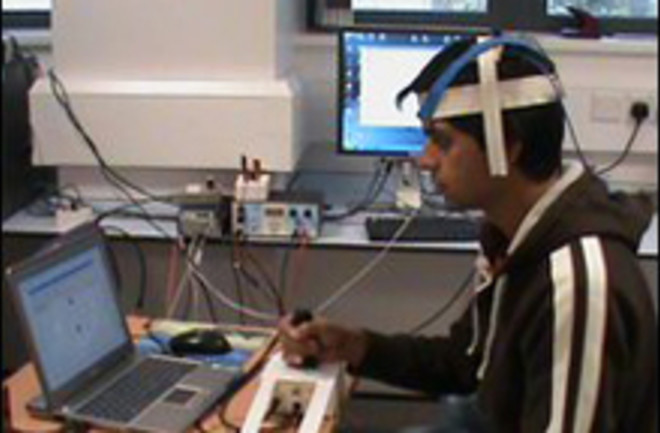 It wasn't quite as dramatic as a slow-motion movie action sequence or a slo-mo instant reply, but researchers have successfully slowed down people's manipulation of a computer joystick by boosting one type of brain wave. The researchers

, and slowed the volunteers' reaction times by 10 percent. The study, published in Current Biology, has implications for Parkinson's Disease, in which patients have trouble with voluntary motions. Brain waves are generated naturally when groups of neurons fire in a certain rhythm. Lead researcher Peter Brown explains that the low-frequency beta waves were already known to play a role in movement.

"Different parts of the brain work together and generate certain frequencies," he explained, "and the movement areas of the brain come together in beta activity. That activity is suppressed just prior to and during movement, so we think the body gets rid of it to prepare to make a new movement" [BBC News].

In the study, the volunteers used a joystick to move a cursor to a target on a computer screen. When they performed the task in the midst of a beta wave boost, their fastest reaction times slowed by 10 percent. Researchers say they were surprised to get such a large effect. That proof that the beta waves directly affect human movement support a theory of how Parkinson's limits patients' motions. Neuroscientist John Stein

pioneered the theory of what he refers to as a "beta straitjacket" -- a pattern of brain activity that prevents Parkinson's disease patients from making voluntary movements. "The theory is that... in Parkinson's disease when people try to move they cannot suppress beta [brain waves] and therefore cannot move" [BBC News],

he said. Potential Parkinson's therapies could try to suppress beta waves in patients, he says. Doctors have already had success in treating Parkinson's patients with deep brain stimulation, in which an implanted device acts as a "brain pacemaker" and emits regular pulses of electricity.