Black Is the New Green

Scientists are learning to mimic nature to produce clean energy, by re-creating photosynthesis in the lab. 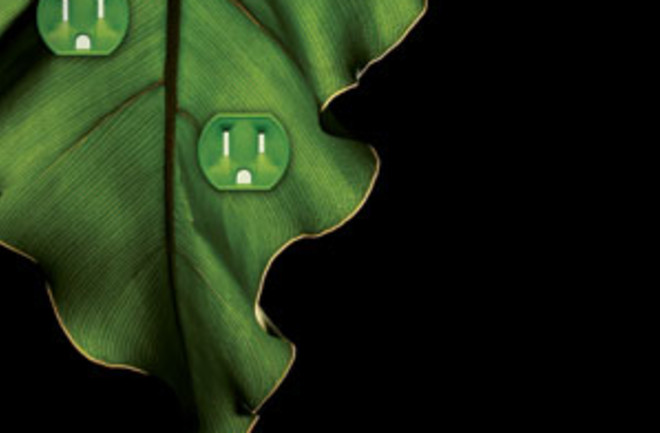 Lilac Amirav is breaking a sweat trying to do what nature has been doing effortlessly for some 3 billion years. She and 30 or so colleagues at the Helios project are trying to build miniature machines that re-create photosynthesis, the process by which green plants take in sunlight and carbon dioxide and produce energy. In a leaf, the product of this reaction is the sugar molecule, which serves as a kind of biological battery: All the plant has to do is break sugar’s chemical bonds, releasing the energy it needs to sustain itself. Amirav’s goal is to tweak this process to better suit the energy needs of a world population that by 2050 is expected to reach 9 billion, a growing percentage of which will want to drive their own cars. She and her colleagues at Helios, a joint project of U.C. Berkeley and Lawrence Berkeley National Laboratory, want to build an artificial leaf that drips ethanol, or some other alcohol, which you could pump right into your gas tank.

New energy technologies have never been in greater demand. With consumption growing, oil supplies tight, and the world in a warming trend, the search is on for better energy sources—clean coal, safe nuclear reactors, and more far-reaching ideas like artificial photosynthesis. Automobiles pose a particular problem because they require a portable source of energy that can deliver a concentrated punch, a quality that sunlight does not possess. But the status quo is unacceptable. Tailpipe exhaust accounts for some 20 percent of the world’s emissions of carbon dioxide; an economic recovery could easily cause the return of $140-a-barrel oil.

The scientists at Helios—and at a growing number of labs around the world doing related work—could revise those equations. Photosynthesis consumes carbon dioxide. If we could pull carbon out of the air and use it to wean cars off fossil fuels, that would go a long way toward reducing humankind’s production of greenhouse gases without impeding technological progress.

The idea of using the sun to make a liquid fuel has been kicking around ever since Melvin Calvin elucidated the chemical steps by which a plant turns sunlight into sugar, for which he won the 1961 Nobel Prize in Chemistry. He wondered aloud if the chemistry could be tweaked to produce automobile fuel, but nobody gave the idea a high priority. In those days carbon was not considered a pollutant, fossil fuels seemed plentiful, and many people were convinced that nuclear power would deliver on its promise of electricity “too cheap to meter.” Two oil-price shocks in the 1970s sent the developed world reeling, but during the 1980s complacency reasserted itself.

Paul Alivisatos was a young chemist in those days, and like many scientists of his generation, he gravitated toward photovoltaics, the technology behind the panels that convert sunlight into electricity. He was optimistic that nanotechnology—controlling matter on the molecular scale—would soon give physicists unprecedented control over the semiconductor materials used in photovoltaic cells. Then by chance in the late 1980s, he was asked to review some basic research in photosynthesis. “I was surprised at how little we knew about it,” he says. As he poked further into the subject in the 1990s, he had something of a revelation. “All the really interesting things that take place in a leaf happen on a nanoscale,” he says. The leaf is a type of nanomachine.

Perhaps the techniques of nanotechnology would come in handy to build a better leaf, Alivisatos thought. He spent the latter part of the past decade exploring this idea and eventually became a codirector of Helios. The techniques he has explored include fancy ways of growing crystals of semiconductor material—oxides of manganese, cobalt, silicon, and many other elements—that can perform the first critical tasks of photosynthesis: absorbing light and displacing electrons. The electrons provide the energy for the next step, causing the reactions that transform one chemical into another. Helios has experimented with turning water into oxygen and hydrogen, which could be used in fuel cells. The ultimate goal is to transform carbon dioxide into oxygen and alcohol.

Both tasks have already been done in the lab. What Helios is now working on is finding a way to do it that could be scaled up to industrial dimensions. That means finding inexpensive materials that can do the job efficiently.

Feng Jiao is one of the determined young researchers addressing that task. The object he is handling in the lab looks like nothing more than a beaker half full of an orange liquid. But this solution of cobalt oxide could be a major step forward in finding an efficient catalyst for photosynthesis. Nature uses a similar compound, manganese oxide, to convert carbon dioxide into sugar, but the process is fragile: The molecule poops out after about half an hour, and the whole cycle comes to a halt until fresh molecules circulate through the leaf cell. A plant can afford such leisure, but a synthetic leaf must do better. Recently Jiao found a way to grow cobalt oxide rods, each 30 to 40 nanometers long, that cluster together like the buildings in Lower Manhattan. When he shines light on the beaker containing these rods, after a few minutes little bubbles of oxygen come to the surface. The rods absorb light, which releases electrons and sets in motion a chain reaction that ends with the water in the beaker releasing its oxygen, as desired.

According to Jiao’s measurements, the rods can produce a healthy flow of hydrogen ions and oxygen for many hours and potentially much longer, for weeks or even months. Then it is a matter of embedding them in a membrane that can keep the constituents separate so they can be harvested and turned into methanol fuel.

Jiao’s rod clusters are by no means the final word in artificial photosynthesis. Helios scientists are still investigating other materials and forms. Amirav makes “all kinds of crazy shapes” with the compounds she is testing. Lately she has had success in modifying rods similar to those Jiao is developing. She will take a minuscule ball of material, grow a rod made of a different material around it, and then attach another ball, made of a third material, to one end. This is how the game goes for now: constant tweaking, all in the hope of finding the right technology for harvesting sunlight and replacing fossil fuels.

The Helios team is not going to make anything that resembles a green leaf. Green, for one thing, is far too profligate with the sun because it does not absorb all colors of sunlight. A Helios leaf would be thin and black. Someday this material could be stretched over many thousands of square miles of countryside. In sunshine, the black membranes would sweat methanol, which would run into tubes that drain into tanks, which would in turn lead to pipelines or tanker trucks. “If a quarter of all agricultural land—about 60 million acres—were devoted to energy, we would need a 1 percent efficiency to meet all the transportation fuel needs of the United States,” Alivisatos says. That is a lot of land, but an artificial leaf with 30 percent efficiency—which Alivisatos thinks is within reach—would bring the requirement down to just 1 percent of all agricultural land.

We have a long way to go. But judging from the progress at Helios, black could be the new green.