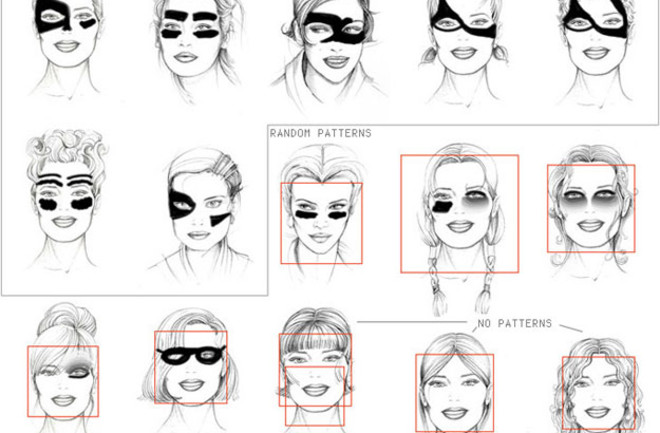 Once upon a time, celebrities could just pop on a pair of large sunglasses and melt away, unnoticed, into the crowds. But things are harder these days with sophisticated cameras and software that can literally identify strangers on the street. Even everyday smartphones may soon be able to ID people. But Adam Harvey, a designer and technologist with NYU's Interactive Telecommunications Program has figured out a way to fly under the radar by reverse engineering the algorithms in software that is used for face recognition. For any face to be detected, PopSci reports, the algorithm must match a cascade or series of features in the expected locations. By strategically camouflaging a particular feature, like the eyes, Harvey found a way to fool the software. In order not to be picked up the cameras, stealth-obsessed operatives would need to apply camo-style makeup right underneath or over the eyes. They could choose between vintage Batman or Catgirl looks, or could go a step further with Blade Runner-style makeup. While the cameras then wouldn't recognize them, Harvey can't guarantee that the striking camouflage won't turn heads on the streets. Related Content: Discoblog: Augmented Reality Phone App Can Identify Strangers on the Street Discoblog: Augmented Reality Tattoos Are Visible Only to a Special Camera Science, Not Fiction: Seeing The Future, Literally Discoblog: One Small Step Closer to Superhuman Cyborg Vision Discoblog: Will the Laptops of the Future Be a Pair of Eye Glasses?Image: Adam Harvey Projects