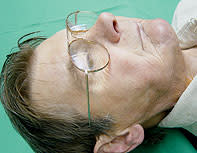 In a major advance in custom-engineered body parts, a 56-year-old German man who lost his jaw to cancer grew a new one. Surgeon Patrick Warnke at the University of Kiel used computer-imaging software to fabricate a titanium-mesh mold that precisely matched the shape of the patient’s lost bone. Warnke then seeded the mold with bone stem cells from the man’s marrow and incubated it in his latissimus dorsi muscle, below the right shoulder blade. The marrow cells quickly filled the mesh with new bone. Seven weeks later, doctors surgically removed the mold and attached it to the remains of the cancer victim’s jaw. Four weeks after the operation, the patient (below)—who had only been able to slurp soft foods for the past nine years—was back on solids. “His first meal was a bratwurst,” Warnke says. “He really wanted that sausage.”

This marks the first time an entire bone has been replaced with a part grown in a mold. Surgeons normally must harvest replacement bone from elsewhere in the body, usually the lower leg. If a large amount of bone is needed, the procedure can do almost as much harm as good. It is also difficult to sculpt the bone precisely, so the implant generally leaves the patient disfigured. Warnke’s technique circumvents these limitations and could be adapted to work with other types of cells. “This is just a proof-of-concept case. It will be necessary to do more operations and get an idea of the long-term prognosis before we say that the method is a success,” Warnke says. “I do think that one day, especially with stem cell advances, we will be able to do this sort of thing routinely—perhaps even with joints or more complex organs.”