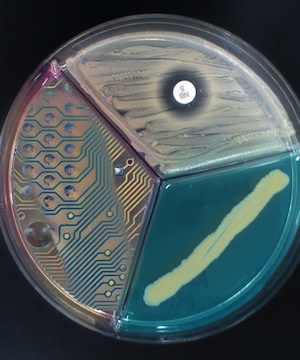 When I think about transhumanism, I think about genetic engineering, cognitive enhancing drugs, and osso-neuro-integrated prosthetics. When Wired interviewee Lepht Anonym thinks about transhumanism, she thinks about kitchen sink surgery, using hot glue as a bioproofer and vodka as a sterilizer. Anonym is a biohacker or "grinder" depending on your preferred nomenclature. Grinding is a counter-culture mindset that has origins in cyberpunk and post-modern disenchantment with progress. Biohackers take body-modification, at-home surgery, and add a twist of the electromagnetic spectrum. Anonym seems to be somewhere between the two:

An American body-modification artist of a similar mindset [to Anonym] has created small metal discs of neodymium metal, coated in gold and silicon, which give off mild electric current when in a electromagnetic field. When inserted under the fingertips, this current stimulates the fingers’ nerve endings, allowing the bearer to literally feel the shape and strength of electromagnetic fields around power cords or electronic devices. Anonym had several of these implanted professionally, choking at the cost, and then learned it was possible to buy the metal herself in bulk, far more cheaply. So she began experimenting with homebrewed sensors. The metal itself is extremely toxic, so she needed a coating to bioproof it, finding a solution ultimately in a silicon putty-like substance called Sugru. But hot-gun glue works fine too, she says. (“I have lots of things in me coated in hot-gun glue,” she says.)

Anonym describes academic transhumanists (aka moi) as "lame." My initial thought was "this is not a transhumanist, this is a crazy person!" Whenever I get freaked out by someone's behavior, I feel old and conservative. To cure this feeling I go see what old, conservative people think. Charles T. Rubin of the Futurisms blog at The New Atlantis was happy to oblige me. Rubin worries that biohackers like Anonym represent some sort of glorification of "self-mutilation" and our society's inability to see her behavior as the cry for help it really is. Rubin's hand-wringing post over Anonym's "self-mutiliation" made me realize what bothered me about Anonym wasn't her attitude or her aesthetic. Besides the ill-advized techniques (vodka for sterilizer? Rubbing alcohol is cheaper and, uh, actually sterile!), the general ethos of biohackers and grinding is one I'm all about. Instead, I realized I had no idea why Anonym was making the modifications she was making. RFID chips are sort of useful, but the neodymium discs seem like a lot of work for a minimal payoff. So you can feel electric current. Neat, I guess? Since neither is illegal, the self-surgery comes off as a "look at how hardcore I am" attitude rather than a genuine act of rebellion. Until the mods give a person a useful ability beyond that of a normal individual, folks like Anonym are just body-modifiers who've found a new way to get their jollies. Cool, yes, but no more transhuman than a piercing or tattoo. Original images via anicole