When it comes to tiny machines, nature itself already has the best template. 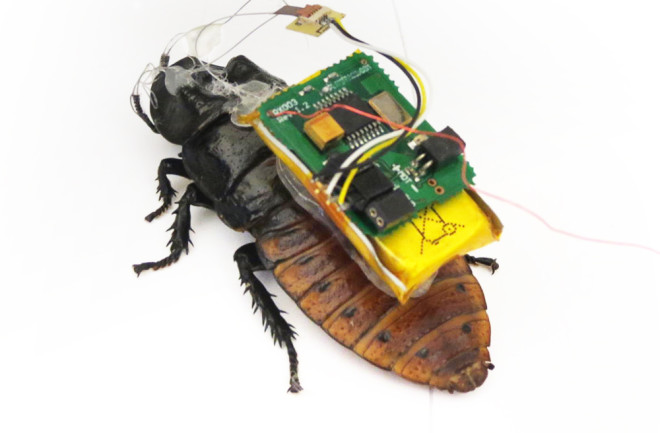 One day, an army of roaches may serve as tiny spies, explorers or a rescue team. (Credit: Michael Tomsic/WFAE 90.7 Charlotte)

You might think of bugs as pests, if you bother to think about them at all. Alper Bozkurt’s research will quickly set you straight: To him they’re engineering wonders, deft flying and crawling machines that reproduce in nature more reliably than widgets made in a factory.

Bozkurt’s interest isn’t just academic. By the time his work is through, in maybe 10 years, an army of cockroaches and moths just might save your life.

An electrical and computer engineer at North Carolina State University, Bozkurt is among the first of a kind: He tinkers with bugs. Much of the circuitry he works with already exists — networks of neurons, honed by years of evolution — and he augments this circuitry with his own small electronic devices.

He envisions a future in which “biobots” — bugs with wires that protrude from their bodies and connect to control devices and sensors — serve as rescue teams, listening for cries of help. But they could also be spies surreptitiously listening for secrets, or explorers charting the geology of remote caves. Wherever a bug can crawl, or fly, the biobots could, too.

In the face of such complexity, "we started to have the idea to collaborate with the organisms" instead of starting from scratch.

To make it all possible, these versatile bugs will carry “backpacks,” as Bozkurt describes their payloads. These allow him to control the bugs directly, as well as provide the insect’s remote surveillance capabilities, which depend on size. For flying critters — so far just moths — this could just mean routers that allow Wi-Fi signals to pass information and instructions between bugs and mission control. But larger, ground-based cockroaches could carry microphones, gas sensors or anything else a biobot army commander can dream up.

Together, the insects form a team that could transform not just search and spy missions, but the very definition of what it means to be a machine.

How to Hack a Moth

Many robots take cues from nature, from slithering snake-bots to skittering six-legged (and relatively giant) robo-roaches. But when it comes to micro-flight, mimicking nature is extra difficult.

A separate group at Harvard has worked for years to shrink complex flying mechanisms — a tiny antenna, nervous system, power source — down to a buglike bot as tall as a penny, called a RoboBee. Each individual component warrants scores of journal papers: how it works in nature, how to re-create it mechanically and which materials could shrink the electronics smaller than ever before. Although RoboBees successfully fly within their lab, their trajectories are pretty unstable; even a small imperfection in its minuscule wings can throw the tiny bot off balance.

Alper Bozkurt holds a Madagascar hissing cockroach wearing a "backpack" of electronics that allow him to control the bug and see what it sees.  (Credit: Marc Hall/North Carolina State University)

In the face of such complexity, “we started to have the idea to collaborate with the organisms” instead of starting from scratch, says Bozkurt. As a student a decade ago, Bozkurt worked on microelectromechanical systems, the kinds of sensors that tell your smartphone which way is up and how fast it’s moving, for example. Moths, he noticed, are basically an aerodynamic collection of such sensors.

Backed financially by the Defense Advanced Research Projects Agency (DARPA) — a government organization that supports research it hopes will someday be useful to national security — Bozkurt and another electrical engineer raised hawk moths as potential biobot spies. When the moths were pupae in their cocoons, the still-forming tissues could adapt to foreign material, Bozkurt says. He made tiny cuts into the protective shells of the pupae and added three wires into the budding body parts that would soon become the brain and neck. A week later the moths hatched, the wires perfectly fused with their brand-new bodies.

In a sense, all creatures — natural, constructed and in between — run on electricity. Take a second to move, or maybe flap, your arms. To accomplish that, your brain had to send an electric signal down the string of neurons in your spine and to the muscles in your shoulders and elbows, telling them to contract and then let go. In the moth, these brain-to-muscle signals flap the wings and tilt the body left or right. Theoretically, if Bozkurt could send the right signals to the moth’s neck via the fused wires, he could “drive” the insect.

After attaching a small helium balloon to a moth to balance out the electronics’ weight, Bozkurt and Amit Lal, his Ph.D. adviser at Cornell, discovered they really could fly the bug, as if its own brain were sending signals on how to move.

“We made it draw circles [in the air],” says Bozkurt. “Then we were able to bring the insect back down, all by sending the right pulses.” There’s no struggle — hacking the moth’s motions is seamless.

Don’t feel bad for the bugs, though; they don’t have pain sensors the way that mammals do. When they get a burst of electricity, “they think that this is an environmental stimulus, like a flash of light or a strong scent, and they use their reflexes to follow it or avoid it,” Bozkurt suspects. As far as the bugs know, nothing strange is going on, and their lives aren’t impacted except when he takes control.

By using this trick, Bozkurt created a bug-sized robot, one that could move better than any purely mechanical device. He just had to co-opt the bug first.

Back to the Ground

Of course, even a tiny spy isn’t particularly discrete if it’s attached to a balloon. DARPA eventually abandoned the idea. After Bozkurt graduated in 2010, he set up his own lab at NC State. With support from the National Science Foundation, he turned his attention to implementing his unique electrical skills on cockroaches, and the rescue missions they could go on with their heavier backpacks full of sensory tech. Another benefit: “You can get them at pet stores,” says Bozkurt.

He used the same approach — a brief, painless burst of electricity makes the cockroach reflexively change directions. Unlike moths, cockroaches don’t go through complete metamorphoses, so Bozkurt couldn’t implant electrodes in them while they developed. Instead, he decided to attach them to adult cockroaches’ antennae, which they use for sensing their environment.

Once he perfected the new surgical procedure, Bozkurt set off to work, taking advantage of a roach’s basic response: Zaps to the antennae can steer the insect left or right, like a remote-controlled toy. First he learned to move the roaches in an S-shaped line. He also confined them to an electronic fence, akin to the fences that jolt pets when they cross an invisible boundary. This lets the roaches mill around as they please while staying within a certain area — useful someday for letting a swarm map an entire area without leaving it.

For the next step, totally automated roaches, Bozkurt connected custom-made software to a Microsoft Kinect, a motion tracking system designed to play video games without a controller. He could give the software a target that he wanted the roach to move toward. The Kinect’s camera tracked the roach’s movements, and if it veered away from the target, the software would instantly send an electrical signal to keep the roach moving in the right direction.

The future army of camera-clad bugs, searching tight spaces for disaster survivors and keeping to a specific route, is that much closer to reality. But in order to deploy roaches in the field, Bozkurt will have to upgrade his sensing system. The Kinect, as a standard camera system, cannot see through ruins or piles of rubble, and it isn’t really meant for a space larger than a rec room.

That’s why Bozkurt isn’t giving up on hawk moths, either. He’s collaborating with University of North Carolina biologist Tyson Hedrick to study how moths steer — and how to steer them better. Right now they’re “test driving” moths on a custom-built platform: The insect is levitated with an electromagnet, which holds it in place as it flaps its wings and allows electric signals from a wire to make it orient itself left or right.

When electric payloads have shrunk just a little more, possibly within just a few years, these moths could fly above the roach army sans balloons and relay all the roaches’ data, moth-to-moth, back to a base camp. Human operators receiving the roach data, along with the moth’s-eye view of the roaches, will guide both species to their next goal.

When the plan becomes reality, a whole new kind of living creature will enter our world: part evolutionary ingenuity, part human genius. But these biobots will also be a new type of machine, perhaps the first of many. The one thing they won’t be is a pest.