Quinones could be the key to flow batteries. 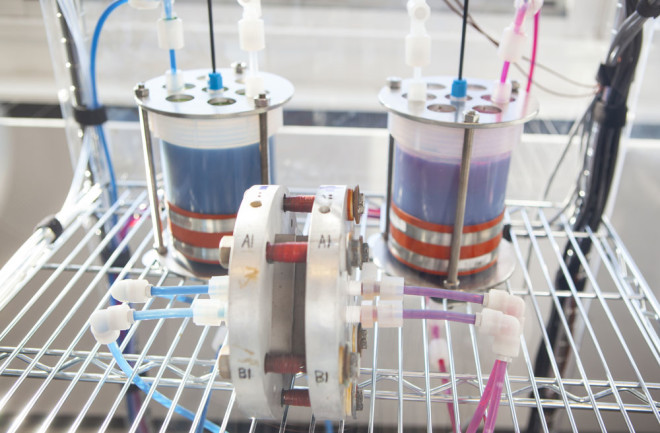 The biggest hurdle to getting more electricity from renewable energy sources is the intermittency of the sun and wind — a problem that better batteries with less expensive materials could solve by storing large amounts of energy until needed. Now scientists think they may have the solution, with the help of a little organic chemistry.

Like conventional batteries, flow batteries store chemical energy and have a positive and negative electrode. When the battery is discharged, electrons and ions move from one electrode to the other, generating a current. Conventional battery materials are solid, while a flow battery’s chemicals — often expensive because they’re from rare metals — are liquid. To hold a large amount of energy, flow batteries need tanks capable of storing thousands of gallons of liquid. “If you want more energy, you just make bigger storage tanks,” says Michael Aziz, an engineer at Harvard. “But the chemicals have to be cheap.”

So Aziz, along with colleagues in the chemistry department, looked to nature for a more practical solution. They turned to quinones, a carbon-based class of chemicals that play an important role in animal and plant metabolism, moving electrons in the chemical reactions we use to store energy in our bodies. The researchers suspected that quinones also could move electrons in flow batteries. The quinone they picked, called AQDS, is already used in petroleum processing.

In January 2014, in the journal Nature, the researchers described a prototype flow battery that uses AQDS for one electrode. They showed that not only does it hold more energy than a conventional flow battery, but the cost of the quinone battery is much lower than other flow batteries — less than $27 per kilowatt-hour of energy stored, compared with $81. They’re now working with a Connecticut company to develop a prototype system.