Bio-Info-Tech: The Cyborg Baby of Cheap Genomes and Cloud Data 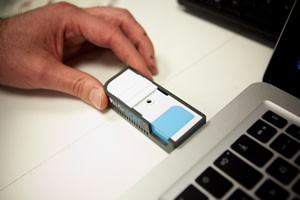 By now you may have heard about Oxford Nanopore's new whole-genome sequencing technology, which has the promise of taking the enterprise of sequencing an individual's genome out of the basic science laboratory, and out to the consumer mass market. From what I gather the hype is not just vaporware; it's a foretaste of what's to come. But at the end of the day, this particular device is not the important point in any case. Do you know which firm popularized television? Probably not. When technology goes mainstream, it ceases to be buzzworthy. Rather, it becomes seamlessly integrated into our lives and disappears into the fabric of our daily background humdrum. The banality of what was innovation is a testament to its success. We're on the cusp of the age when genomics becomes banal, and cutting-edge science becomes everyday utility. Granted, the short-term impact of mass personal genomics is still going to be exceedingly technical. Scientific genealogy nuts will purchase the latest software, and argue over the esoteric aspects of "coverage," (the redundancy of the sequence data, which correlates with accuracy) and the necessity of supplementing the genome with the epigenome. Physicians and other health professionals will add genomic information to the arsenal of their diagnostic toolkit, and an alphabet soup of new genome-related terms will wash over you as you visit a doctor's office. Your genome is not you, but it certainly informs who you are. Your individual genome will become ever more important to your health care. But this is all incremental change on the margins. Genetics has already been bleeding into daily life inexorably over the past generation. Who even thinks to note the battery of screening tests which newborns are put through now? The real revolution in our lives will be the merging of personal genomics with the information cloud more generally. Large corporations already have detailed data on your purchasing habits. Now imagine that every morning and evening you perform a biomarker assay at the cost of a pin prick. Consider the possibility that in ten years, millions---perhaps tens of millions---of individuals may trace their own biomarkers daily. Now imagine that all these data pour into the cloud, along with genomic information, age and sex, and purchasing habits. Additionally, position tracking will also generate a spatial profile of individuals over time. Today correlation between cancer and location is the stuff of class-action lawsuits. But this sort of correlational science is often weak tea, and will seem pathetic in comparison to what is to come. Biological information technology will hyper-charge correlational science. From the cloud one can extract out patterns of elevated cancer risk, conditional on genetics, location, and lifestyle. Correlations of particular genomic features with purchasing habits will naturally fall out of the information stream. Data will reveal your risk based on exactly where you live, while controlling for genetic background. Currently medical trials runs into thousands of individuals, with coarse assessments of confounding variables. The new information cloud will increase the sample size to millions, and instead of self-reports it will be able to track confounds in real time! You may wonder what this has specifically to do with the $1,000 genome. In many ways, modern genomics has been one of the first fields where such mass agglomerations have data have become the norm. Many techniques out of genomic science will be leveraged more generally across our lives. The Human Genome Project will be less relevant over the long term than the broader set of skills and methodologies that emerged out of it, and which became necessary for a whole generation of biologists. The $1,000 dollar genome will arrive within the next year or two, but the milestone will be forgotten soon enough. Rather, it will be a flag which heralds the birth of a new information age, when gray silicon and red goo merge together, as as the prefix bio on biotechnology starts to become archaic.