Behold the nerdiest cocktail party ever! 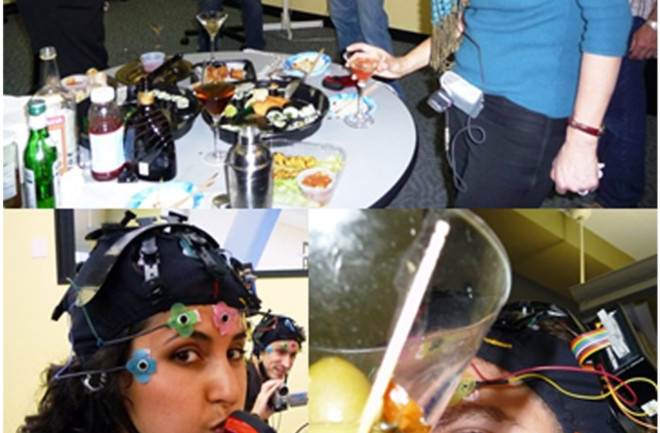 Figure 1. EEGs of ten ambulatory participants simultaneously measured during a cocktail party.EEGs were recorded and transmitted to PCs while the partiers chatted, ate sushi and hors d'oeuvres and drank vodka martinis or vodka and cranberry cocktails according to their personal inclinations. Participants also measured breath alcohol contents, took photos and checked the data collection (lower photos). There are numerous studies that investigate how drinking alcohol affects our brains. However, most of these studies take place in laboratories and medical settings that have almost nothing in common with the bars and parties where most of us drink. This raises the question of how applicable the results are to drinking in more typical settings. So, these scientists tried to measure brain activity while socializing and drinking in a more "normal" setting. To do this, they devised special electroencephalography (EEG) hats that let participants roam and interact with each other like they would at any party while measuring the electrical activity of their brains. Which is pretty awesome. However, all that being said, Fig. 1 (above) probably represents the nerdiest cocktail party EVAR!Towards measuring brain function on groups of people in the real world. "In three studies, EEGs from three groups of participants were recorded during progressively more real world situations after drinking alcoholic beverages that brought breath alcohol contents near the limit for driving in California 30 minutes after drinking. A simple equation that measured neurophysiological effects of alcohol in the first group of 15 participants performing repetitive cognitive tasks was applied to a second group of 15 operating an automobile driving simulator, and to a third group of 10 ambulatory people recorded simultaneously during a cocktail party. The equation derived from the first group quantified alcohol's effect by combining measures of higher frequency (beta) and lower frequency (theta) power into a single score. It produced an Area Under the Receiver Operator Characteristic Curve of .73 (p