Beetle-Inspired Adhesive Lifts Lego Man; Could One Day Do Same for Regular Man 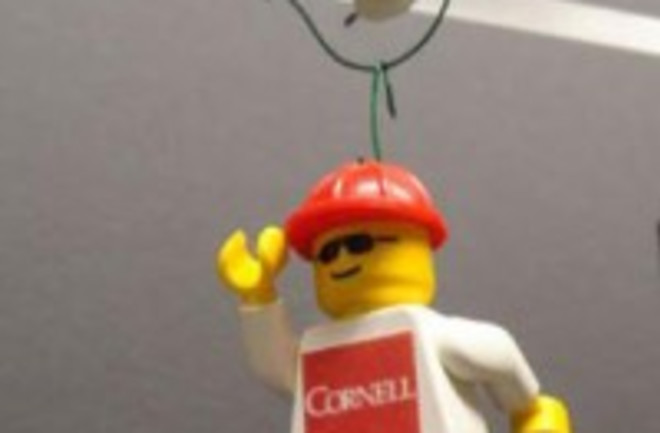 If you have been itching to clamber across glass windows or cling to a ceiling like Spiderman, that wacky dream may today be one step less wacky than it was yesterday. Researchers Paul Steen and Michael Vogel of Cornell University think they can help you tap into your inner Spidey through a palm-sized adhesive device that could one day allow people scale walls. The scientists didn't work with any real-life arachnids while designing their tech, instead drawing inspiration from a beetle species in Florida that can stick and unstick from leaves at will. The leaf beetles can withstand pulling forces of 60 times its own body weight by using the surface tension of many tiny drops of water, which form "liquid bridges" between the beetle's body and the leaf. The scientists' contraption looks like a little plate and could be worn either on the palm or as a boot sole. While the device isn't strong enough to be tested on people yet, it did keep this Lego man dangling from a slick glass shelf. The Register describes how this device works:

In the new beetlemimetic tech, the sticky plate has thousands of tiny holes in it, just microns across. An electric field -- generated by a regular 9-volt battery -- causes tiny droplets of water to be squeezed through the holes, each one generating a minuscule sticky blob in contact with the target surface. The electrostatic pump is cunningly designed so that no more water can come out once it's switched off, so preventing the blobs running together and losing effectiveness. When the electric field is reversed, the droplets are sucked back into the holes and the sticking effect disappears.

So far their prototype with 1,000 300-micron holes has managed to support 30 grams, and they estimate that a bootsole unit measuring 3 inches by 5 inches would theoretically be able to haul a full-grown man. You can watch how this device works in this video here, in which researchers daringly dangle a Hershey bar. Related Content: 80beats: How To Make Water Drops Bounce Off each Other Like Beach Balls 80beats: Caught on Film: Raindrop Forms Parachute, Explodes Into Motley Smaller Drops 80beats: Ultra-Low Surface Tension Holds Together “Droplets” of Sand 80beats: Scientists Make a Super-Strong Nanotech Glue Modeled on Gecko FeetImage: Micheal Vogel