Avoiding the Hand of God Look at the Movies

A lot of science went into making those monster waves in the film The Perfect Storm. Scale models of waves look phony because the water droplets and ripples seem too big, and computer models tend to lack fine detail. So John Anderson, a computer graphics scientist with Industrial Light and Magic, and his colleagues created software that simulates the fluid dynamics of a heaving ocean far more believably. "The trick is trying to cheat the physics," Anderson says. "If you want a wave to break at a certain time, you have to manipulate it a significant amount of time ahead. You can't just come in and break it right then because it will look like the hand of God just came down and slapped the thing. The 'hand of God' look is to be avoided as much as possible." Ironically, Anderson's improved simulations of breaking waves could prove useful in designing ships that can better withstand stormy seas. 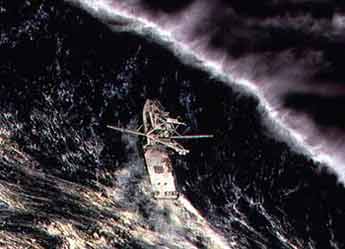