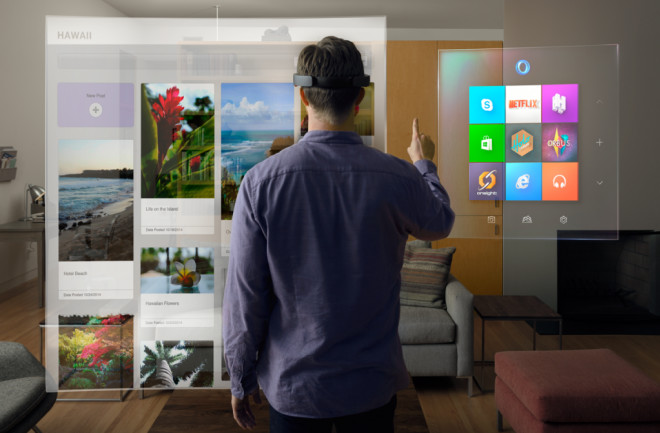 The Microsoft Hololens headset is an example of augmented reality technology that blends the virtual and real worlds. Credit: Microsoft This has been hailed as the year of virtual reality. By the end of 2016, four major headsets backed by tech giants such as Facebook, Sony and Samsung will have debuted with the promise of providing total immersion inside virtual worlds. But tech industry leaders still say that augmented reality technologies which blend virtual elements with the real world offer even more promise in the long run. You would be forgiven if you got the impression that the future is all about virtual reality. Maybe it's because Hollywood and pop culture have already spent years putting the idea of virtual reality in many people's heads through films such as "The Matrix." Maybe it's awareness of virtual reality benefiting from a previous boom and bust cycle of mainstream excitement in the 1990s. Or maybe it's simply the fact that the latest generation of more refined virtual reality headsets have grabbed all the headlines recently. Whatever the case, it'd be easy for casual news readers to miss the fact that much of the tech industry is betting big on augmented reality instead of virtual reality. When Apple's Tim Cook said that the market for augmented reality would be larger than virtual reality in an ABC News interview, he was not making a visionary statement about the future. Instead, he was simply stating the common wisdom in Silicon Valley. A survey of 650 startup founders, tech company CEOs and investors found that two thirds believe revenue from augmented reality (AR) products and services would surpass revenue from the virtual reality (VR) market. The VR market is currently far bigger than the AR market, but a separate report by the consultancy firm Digi-Capital predicted that the AR market would reach $90 billion by 2020 compared to the VR market's $30 billion.

The success of "Pokemon Go" does hint at the short term advantages of augmented reality over virtual reality. It's easy for anyone with a smartphone to download and play the free-to-play mobile game, which means the game had access to a huge market of customers. The analyst firm AppAnnie reported that "Pokemon Go" had been installed more than 100 million times as of early August. By comparison, it's harder to experience the wonders of virtual reality without dropping some dollars on a VR headset. Cheap Google Cardboard headsets costing $15 and up can provide smartphone users with a taste of virtual reality experiences downloaded through mobile apps, but the more sophisticated VR headsets can cost hundreds of dollars. Augmented reality's mobile advantage was cited by Andrew Ng, chief scientist at Baidu Research in Silicon Valley, as a big reason why he was especially "bullish" on augmented reality in the short term. "It's just really, really tough to ship hardware to hundreds of millions of people and to convince hundreds of millions of people to spend tens or hundreds of dollars to buy your AR or VR goggles," Ng said in an interview on the Sinica Podcast. Baidu is China's search engine giant equivalent to Google. The Chinese tech giant has already begun rolling out augmented reality games and enhancements for advertisements through its existing mobile apps. That means it can already push augmented reality out to the hundreds of millions of Chinese people with Baidu's apps installed on their smartphones. The earliest big-name augmented reality headsets such as Microsoft's Hololens and Magic Leap may not go on sale for the general public before 2017 and will likely cost hundreds or thousands of dollars. That presents the same or even higher price barrier to customers as many of the most expensive virtual reality headsets already on the market. (It's worth noting that Microsoft and Magic Leap often describe their headsets as "mixed reality" technology, which includes augmented reality.) Beyond the consumer market, both virtual reality and augmented reality will almost certainly find uses and customers in industry, academia and the military. In the long run, it's likely both markets will generate plenty of revenue for the tech companies pushing out related products and services. But Silicon Valley seems to be placing its biggest bets on augmented reality's mix of virtual and real worlds.

Earth Is Spinning Faster Now Than It Was 50 Years Ago