Atlas Gets Knocked Down, But It Gets Up Again 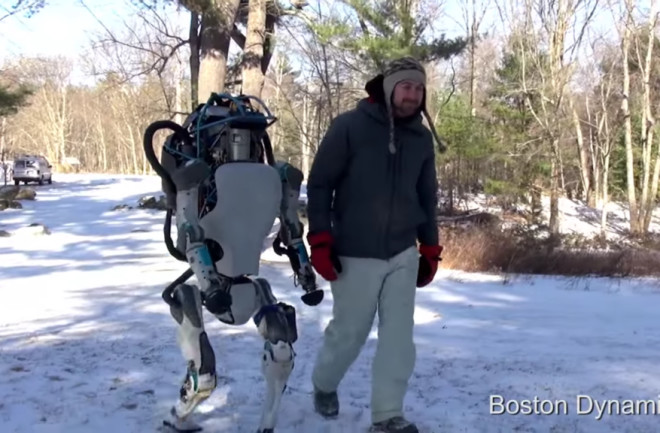 The Atlas robot goes for a walk. (Credit: Boston Dynamics) Trudging through the cold forest and getting pushed around by your human creators is just part of a day's work for a robot at Boston Dynamics. Life is hard for a prototype, but every time it gets knocked down, it gets back up again. No, we're never gonna keep it down. The recently redesigned Atlas robot is well equipped to handle the day-to-day struggle in the lab. The bipedal bot can navigate uneven terrain, pick up and stack boxes, and even pick itself back up after it takes a tumble. And when Atlas has had enough, it can just walk out of the door.

Walking Is No Simple Task

While most humans master the art of walking by the age of two, getting a robot to reliably saunter on two legs has posed a formidable challenge. Roboticists have been chipping away at the problem for decades now, because a two-legged robot is more maneuverable and efficient than a four-legged one. Further, a robot that moves like us can also perform tasks like us, ideal in environments designed with humans in mind. To better mimic human motions, Boston Dynamics, which is owned by Google, upgraded the sensors in Atlas' body and legs to monitor condition and correct motions on the fly. LIDAR laser and stereo sensors in the head provide continuous feedback about its environment. These sensors offer a more refined means of adapting Atlas' response to adverse conditions, such as a snowy forest, and make it all the more human-like. This version of Atlas has even been scaled down to better approximate the average human, standing just under six feet tall and weighing in at around 180 pounds. [embed]https://www.youtube.com/watch?time_continue=161&v=rVlhMGQgDkY[/embed] There are anthropomorphic echoes in the way Atlas bends to pick up boxes, pushes doors open and flails its arms in an attempt to regain its balance. Should Atlas actually suffer a fall — or get pushed over by a bully in the halls of Boston Dynamics — it performs a jerky, robotic version of a "burpee" to push itself back up. The act of standing back up may be the most significant technological progression made here — most other robots are helpless once they're grounded.

The Atlas robot standing back up after a fall. (Credit: Boston Dynamics)

A Challenger for the Next Challenge

A previous version of Atlas was popular at last year's DARPA Robotics Challenge, where the model was adapted by several teams, one of which took second place. That competition included tasks that required balance and coordination, such as opening doors, clearing rubble and climbing stairs. Only one robot actually managed to stand back up after falling, and it had the help of mechanical treads. While the enhanced physical abilities of Atlas represent its primary improvement, it also appeared to navigate and perform tasks by reading QR codes — those black and white patterns consumers scan with their smartphones. By placing codes on boxes and doors, engineers can give the robot a set of instructions. It may be a while before Atlas is ready to leave the laboratory and venture out on its own — although it can walk out of the door. However, Atlas has certainly made some important steps toward efficient autonomous movement. Maybe now its creators will be a little nicer.