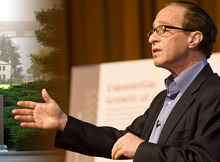 The future, according to author and technological soothsayer Ray Kurzweil, is going to be awesome. In his books,

he maps out a future for humanity in which we live forever, supported by a fleet of cleverer-than-human artificial intelligences who solve such trivial problems as hunger and disease, while simultaneously creating ever more intelligent computer minds, racing technological progress forward according to his Law of Accelerated Returns [Telegraph].

Now, Kurzweil is opening a new school, Singularity University, that will gather smart people together and encourage them to bring that future to pass. Kurzweil dreamed up the school with Peter Diamandis, CEO of the X Prize Foundation, and got backing from Google and NASA; it will be housed on the NASA Ames base in California. The university takes its name from Kurzweil's recent book, The Singularity Is Near, in which he argues that

exponential advances in technology will shortly transform human life beyond all recognition.... This is Kurzweil's own take on the widespread science-fiction use of the term "singularity" to refer to the day when artificial "intelligence" and/or processing power surpasses that of the human race's collective brains. Sci-fi writer Vernor Vinge probably did most to hijack the word "singularity" from its use in physics to describe the breakdown of normal principles near a black hole [The Register].

Singularity University isn't an accredited college, and won't operate like one. The institute will

consist of a single, nine-week course of study every summer, during which 120 students from a cross-section of disciplines will mix together to tackle weighty issues. Tuition will be $25,000. Candidates will be chosen mostly from graduate and post-graduate programs around the world. Singularity will also be offering three-day and 10-day courses for business executives throughout the year, hoping to give them a glimpse of the future in their various industries [San Francisco Chronicle].

Classes will range across topics including nanotechnology, biotechnology, artificial intelligence and robotics, energy, and space. The aim: Nothing less than to solve the world's most pressing problems, from hunger to global warming. Or, if the students can't get through all that in nine weeks, at least to set them on that path.

"We are reaching out across the globe to gather the smartest and most passionate future leaders and arm them with the tools and network they need to wrestle with the grand challenges of our day," said Diamandis [San Francisco Chronicle].

The university has already collected an impressive range of instructors--names like Will Wright, who created the computer games The Sims and Spore, pop out from the list--indicating that Kurzweil's effort is being taken quite seriously in high powered technology circles. But not everyone drinks the Kurzweil Kool-aid promising a brighter tomorrow.

Kurzweil, who famously consumes more than 100 supplement pills a day and regularly checks around 50 health indicators, has been criticised by some experts who see his predictions as outlandish. In a 2007 interview, Douglas Hofstadter, the Pulitzer prizewinning author and professor of cognitive science at Indiana University compared his ideas to a blend of very good food and "the craziest sort of dog excrement" [The Guardian].