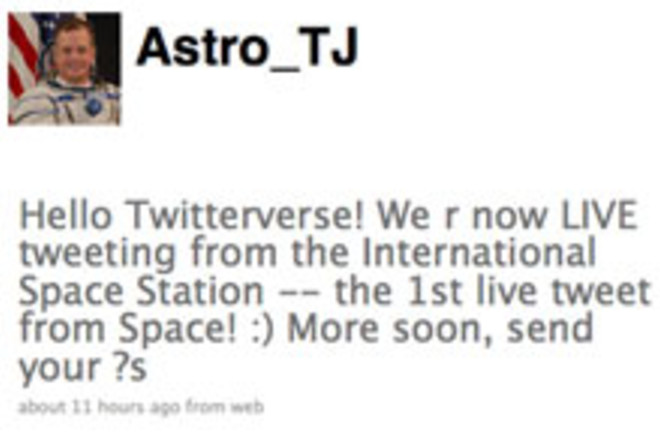 It's official. Even people in space are tweeting. NASA announced today that astronaut T.J. Creamer on the International Space Station has become the first person to tweet directly from space, making use of a brand new direct Internet connection. Creamer tweeted: "Hello Twitterverse! We r now LIVE tweeting from the International Space Station -- the 1st live tweet from Space! More soon, send your ?s" Yay. Space tweets. Sweet. In the past, astronauts could use email and twitter--but they had to relay their messages to ground control in Houston, who then sent them on. But now, thanks to the new system of personal Web access, called the Crew Support LAN, astronauts can take advantage of existing communication links to and from the station and browse the Web directly. Associated Press reports:

The International Space Station crew can now use an on-board laptop to reach a desktop computer at Mission Control, and thereby browse the Web. This remote Internet access is possible whenever there is a solid high-speed communication link.

So no more going through ground control if astronuats want to update their Facebook status. Which is great for them, as we imagine it must get a little lonely out there in space. If you want to follow what they're up to on a day-to-day basis, follow their tweets here. With direct internet access in space, we wonder if the World Wide Web has taken the first step towards becoming the Universe Wide Web. Also, if all the astronauts are online now--who's manning the ship? Hello! Related Content: 80beats: “Interplanetary Internet” Will Soon Bring Twitter to the ISS 80beats: NASA Sends First Space-Mails via New “Interplanetary Internet” 80beats: Buzz Aldrin Speaks Out: Forget the Moon, Let’s Head to MarsImage: Twitter.com