Artists Make Pottery Out of Your Smartphone's Toxic Waste 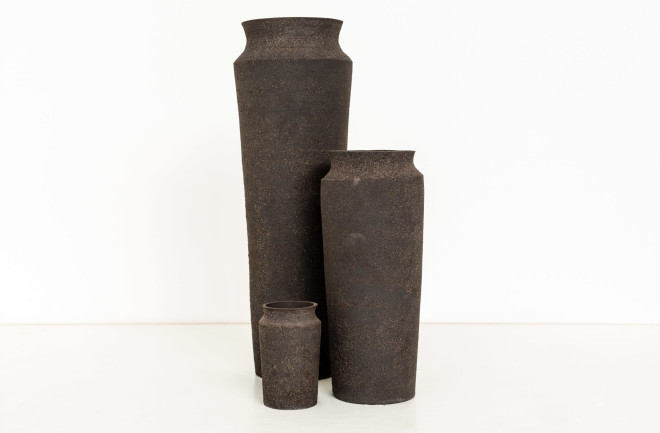 Three finished vases produced using the amount of waste created by a smartphone, laptop and electric car battery, respectively. (Toby Smith/Unknown Fields) For most of us, our smartphone’s “life” began the second we walked out of a sleek electronics store and ripped the new device out of its packaging. But if you really trace your phone back to its birthplace, you’ll probably end up in a toxic, radioactive lake in Inner Mongolia. We know this thanks to a group of architects, writers and designers called the Unknown Fields Division who trekked across the globe to document, in reverse, the environmentally taxing journey our phones and other gadgets take before they ever arrive in our pockets. Through photos, video and even radioactive ceramics, Unknown Fields vividly reveals the toxic cost of our gadget obsession.

From Tweets to Tailings

Guided by the global consumer electronics supply chain, the Unknown Fields team embarked on a 3-week journey that took them through electronics stores, across the ocean via container ships and finally to the Mongolian city of Baotou — the polluted birthing grounds of smartphones, televisions, laptops and electronic car motors. Baotou is home to 70 percent of the world’s rare earth metal reserves — the raw materials electronics manufacturers desire most.

Shaping the toxic mud into vessels in Unknown Field's London workshop. (Toby Smith/Unknown Fields) Unknown Fields’ Tim Maughan, writing for the BBC, makes it painfully clear the price Baotou has paid for its wealth of resources:

“Massive pipes erupt from the ground and run along roadways and sidewalks, arching into the air to cross roads like bridges… After it rains (coal trucks) plough, unstoppable, through roads flooded with water turned black by coal dust…Everywhere you look, between the half-completed tower blocks and hastily thrown up multi-storey parking lots, is a forest of flame-tipped refinery towers and endless electricity pylons. The air is filled with a constant, ambient, smell of sulphur.”

Radiation testing on the lake's mud is performed by Michael Lockyer in UCL Radiation Protection Safety Services lab. (Toby Smith/Unknown Fields) But if there’s a symbol of Baotou’s link with our appetite for electronics, it’s the manmade, sludgy lake where mining companies pump the waste from the world’s largest rare earth metals refinery. The clay here has three times the background radiation in the environment, and is the byproduct of not just consumer electronics, but of the components of green technologies such as wind turbines and electric cars.

Unknown Fields collected some of the lake's sludge and brought it back to their workshop in London, where they used it to craft some poignant artworks embodying the cost of electronic luxuries. Sculptors produced a series of traditional Ming ceramic vessels, each using the same amount of toxic waste that results from the manufacturing process of a smartphone, a laptop and a smart car battery, respectively.

Collecting muck as fountains of tailings spew out of industrial piping. (Toby Smith/Unknown Fields) The artists wore masks and skin protection throughout the process, to protect themselves from the muck. Unknown Fields collaborated with photographer Toby Smith to document their entire journey in a film that’s composed of a single panning shot meant to represent a global conveyor belt. The entire project, dubbed “What is Luxury,” will premiere April 22 at the Victoria and Albert Museum in London.