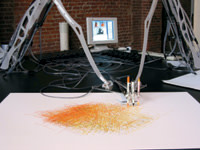 Thousands of rat neurons collectively take control of this robotic arm--but so far their art skills are very crude.

Courtesy of Symbiotica Research Group and the Steve Potter Lab

Steve M. Potter, a biomedical engineer at Georgia Tech and at the Emory University School of Medicine, is giving rat neurons a chance to draw pictures. This seemingly whimsical endeavor is part of an effort to link brain cells with computer chips, a step toward building a smart machine.

Potter and his graduate student Doug Bakkum, along with bioartist Guy Ben-Ary and his team at the University of Western Australia, grow their rat neurons over an array of 60 electrodes. Then they take a photo of a person’s face, transform the image into a pattern of electrical signals, and feed the signals to the neurons through the electrodes. The cells react with their own electrical activity, which triggers a robotic arm to sketch a line. A computer compares the drawing with the original image to create an error map, in which darker areas indicate a greater incidence of error.

The map is fed back to the neurons and the cycle repeats. The researchers have yet to see signs of learning behavior in the neurons, but Bakkum plans to improve the mechanics of the robot arm to enhance its copying abilities. Meanwhile, Ben-Ary ponders the philosophical implications of the project: “In the future, will we treat these systems like pets or objects? Computers crash, but neurons die.”