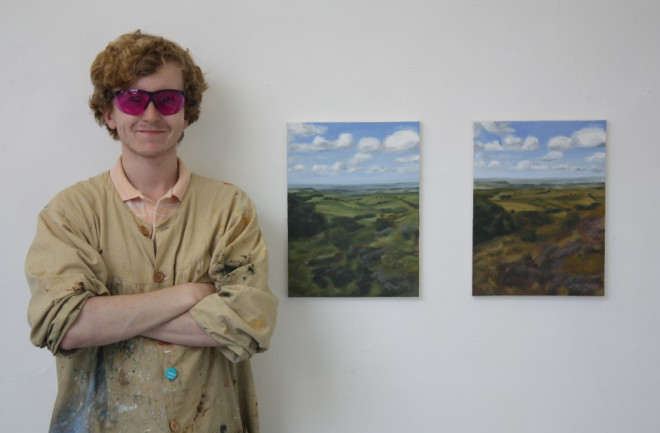 The artist Adam Fenton standing with a painting he made without Oxy-Iso glasses (left) and with the glasses (right). Credit: Adam Fenton Being color blind never stopped Adam Fenton from painting. The London-based artist has built his career upon landscape paintings and color studies despite being one of the millions of men with some form of red-green color blindness. But when Fenton heard about a new type of glasses that could correct for color-blind vision, he was eager to see what difference they could make in both his art and his daily life. One of Fenton's friends sent him an article about Oxy-Iso glasses; a lens technology that enhances the wearer's vision of oxygen levels in blood and highlights certain color hues that would normally be invisible for people with red-green colorblindness. Researchers at 2AI Labs originally invented and sold the glasses under the brand name O2AMP with the idea of helping physicians and nurses better spot veins beneath the skin or see bruises on a patient's body. More recently, the glasses have found a customers among the colorblind community as well. "When I first heard about them, I envisioned wearing them and being instantly cured," Fenton says. "It was nothing like that, but other interesting things happened."

The evolution of color vision

The Oxy-Iso glasses arose from the evolutionary theories of Mark Changizi, a theoretical neurobiologist and director of human cognition at 2AI Labs. Changizi has observed how humans and certain other primates have evolved the unique ability to see red-green colors. By comparison, most mammals lack the ability to see red-green colors. Changizi's theory, as detailed in his book "The Vision Revolution," suggests that red-green color vision evolved to help the social life of primates such as humans. Oxygen levels in blood can change skin color between red and green, whereas control over the amount of blood in the skin can make the color shift between yellow and blue. Together, they can transmit a wide array of social signals. A flushed face can signal anger; blushing may indicate embarrassment. Blanching or yellowing can accompany sudden fear. Changizi points out that primates with red-green color vision also have bare patches of skin on their faces or butts to make such signaling visible. (Humans are notably naked compared to most hairier primates.)

Credit: Adam Fenton Changizi and his 2AI partner, Timothy Barber, also realized that the oxygen levels in blood affect skin color in a way that gives useful clues about a person's health. That provided the initial medical focus for their O2AMP technology, including the Oxy-Iso glasses that Fenton read about. Fenton reached out to Changizi and asked if he could try out a pair of the Oxy-Iso glasses as part of an artistic experiment. His red-green color blindness — one of several hereditary conditions that affect about one in eight men versus one in 200 women — had always made it difficult for him to see warmer color hues such as pink, red, orange and brown. But when he received the glasses and tried them on, he realized that the glasses highlighted reddish and orangish colors in a way that made the world look surreal. London's famous double-decker buses appeared to glow "radioactively" as they drove down the road. His own skin appeared as an unnatural orange. "It's kind of like when you wear those old 3D glasses; everything is one color, but red things or warm things really jumped out," Fenton explains. "I noticed my skin and it almost had a strange glowing effect. I learned that warm colors exhibited this phenomenon."

Fenton had previously learned to apply similar-looking colors "blind" by deducing their effect on ordinary people without color blindness through years of painting experience. For the first time, the Oxy-Iso glasses allowed him to see the difference between colors such as Burnt Sienna and Raw Umber; the former had the extra glowing effect of warmer colors as seen through the glasses. But colors such as greens and blues did not look noticeably different with the Oxy-Iso glasses, even if the glowing effect of the warm colors almost made the greens and blues seem colder by comparison. The Oxy-Iso glasses allowed Fenton to experiment with how they affected his painting style. He had previously done a series of landscape paintings all based on the same photograph to consider the variations that arise both intentionally and unintentionally in such projects. With the glasses in hand, he worked on two similar landscape paintings that he titled "Colour Study A" (made without the glasses) and "Colour Study B" (made with the glasses).

Painting study B with the Oxy-Iso glasses proved somewhat trickier than expected. The warmer colors popped out in Fenton's vision while he wore the glasses, but sometimes the similar fluorescent glow made it difficult to tell the difference between warm hues such as red and orange. At the same time, cooler colors such as greens, cool browns, grays and blues tended to look similar because they were not highlighted by the Oxy-Iso glasses. "One difficulty experienced with the Oxy-Iso Optics is the distinguishing between light and dark tones," according to Fenton's written notes. "The glasses make darker warm hues appear brighter due to the presence of red. The brighter/lighter green hues appear darker/duller." In a a recent phone interview, Fenton recalled that wearing the Oxy-Iso glasses didn't necessarily help him with painting or achieving what he wanted with his particular artistic goals. But he point out that wearing the glasses allowed him to fully pass the Ishihara test that is commonly used to help diagnose color blindness. He also continues to use the glasses to occasionally check the differences in warmth between similar shades of brown or other colors.

Seeing through the eyes of artists

A series of landsape paintings done by Fenton prior to his experiment with the Oxy-Iso glasses. Credit: Adam Fenton The idea of how color blindness impacts an artist's vision has fascinated people for decades. Speculation that artist Vincent van Gogh was color blind has recently spawned some fun visual experiments despite lacking any historical evidence. In reality, color-blind artists have dealt with their own variations of color blindness in different ways. For instance, Charles Meryon, a 19th-century artist known for his images of Paris, worked around his color blindness by focusing on etching rather than painting. But Fenton sees color blindness as just one element of his own personal style that has not hindered his artistic goals or work. "Color blindness is a condition that is diagnosable and recognized," Fenton says. "But I think every person or every artist has their own way of seeing and they can translate that into their work." Fenton occasionally receives suggestions that he try to create paintings that convey the view of a color-blind person. He avoids doing so mostly because he finds the idea to be somewhat gimmicky and one-dimensional. To him, there are many more interesting things about how individual artists translate their vision of the world into painting, sculptures or any other forms of art. "That’s why painting is interesting to people; it's about how each person does that process of translation, whether it's with big brush strokes or by using a lot of color," Fenton says.