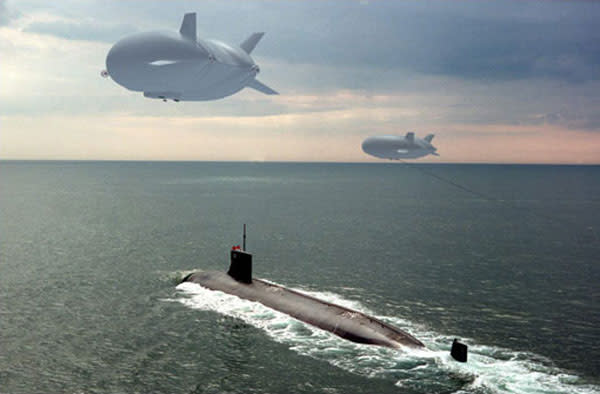 Was Canada mocked one too many times at the last UN meeting/G20 powwow? Because they seem to be satisfying a serious manpower inferiority complex with plenty of...blimppower. The floating objects are NOT blimps, says Hybrid Air Vehicles, the company that makes them and is selling 45 to Canadian flight company Discovery Air

---they're lighter-than-air vessels. But they look pretty blimpy to us. And combined with the Canadian military's recent purchase of a prototype stealth (wait for it) snowmobile

, we see the seeds for an epic motion-picture event: the Great Canadian Wars of 2012. Waterworld

at -12 degrees! But who, exactly, would they be fighting up there? Canada has no northern neighbor, except for wee harp seals and lemmings (there are polar bears, of course, but they've got bigger things to worry about). The blimpish vehicles, which lift off using buoyancy from helium and carry up to 55 tons, will be used for moving heavy cargo for industrial projects in the far north, according to a press release

from HAV (though the vessels are also useful for military surveillance and materiel transport, according their site). Getting places in the northern climes, where extreme cold and ice make plane and car travel difficult, is a toughie, and these babies need no runway, can hover like a helicopter, and can carry massive amounts of stuff from point A to point B. But the military snowmobiles? Who knows. Even if Canada is prepping for the resource-rush that will likely ensue as the Arctic melts, they'd be better off investing in ships. Or, maybe, more blimps. [via New Scientist

Image courtesy of HAV