Archaeologists See and Smell the Past With Augmented Reality 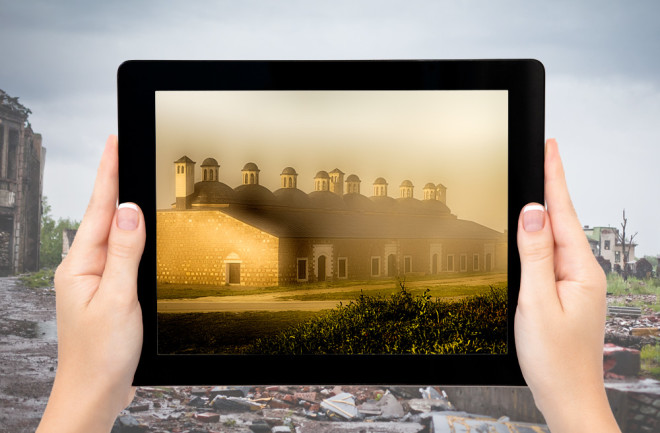 Photo illustration. Credit: dezi/ Okyay/ Denys Prykhodov via Shutterstock Try to picture a time machine. You probably envisioned a tricked-out DeLorean or, perhaps, a blue, spinning phone booth, right? But today, time travel isn’t so much about fast cars or alien technology as it is about tweaking our perception of reality. In fact, if you’re reading this on a tablet, you’re holding a time machine of sorts in your hands right now. Of course, your iPad won’t actually transport you back in time, but it can serve as a window into another world. Imagine visiting the Parthenon, for example, and when you point your iPad toward the crumbled structure, you see the majestic building, but as it was thousands of years ago. You can even walk toward and around the structure, and so long as you’re peering through the tablet, it’s as if you were walking through the past. This immersive experience, called augmented reality, has captivated archaeologist Stuart Eve, who is trying to change the way we learn history through the five senses. He’s working on augmented-reality technology that not only visually recreates ancient ruins, but also gives you a sense of what they smelled and sounded like.

History Through the Five Senses

Eve’s app under development is called Dead Men’s Eyes, which he’s using to investigate how augmented reality can assist in scholarly research. Archaeologists are in the business of reconstructing the past, and augmented reality could help researchers not just visit ancient sites, but live them. Eve built the augmented reality system with a smartphone, an open-source microcontroller, and a video game development software. He scouted historic sites, filming his path and recording all his observations. Then, he recreated the landscape in a coordinate-based mapping program. Finally, using video-game building software, he created the structures and placed them into their proper locations on the map. The final result can be deployed in the field, as Eve explained in a recent article for The Atlantic:

Once the app had my location, I was able to hold up the iPad and look through the video screen. Using a mixture of the Unity3D gaming engine and Vuforia’s augmented reality technology, the app overlaid reconstructions of the houses in their correct location and perspective relative to where I was standing. As I turned, the virtual houses updated their position and I could see the whole village.

He could not only see the huts from an ancient tin-mining village, he could actually walk inside and see what the view from their front door was. You can see a simple demonstration of his augmented reality system in the video below:

Seeing is just a part of the experience Eve wants to create. He also developed Dead Man’s Nose, a prototype device that emits odors, like the smell of a campfire and roasting meat, as you pass by specific locations. When you pass a pinpointed smell location, it fires up a small fan that wafts the odors in your direction. The device is a little noisy and clunky (it accompanies you in a camera bag slung around your neck), but some 300 different scent formulas can be loaded into the device, from woodsmoke to farmyard. Eve has also pinned sounds to specific GIS locations, which play more loudly the closer the user walks toward their source. So when you pass a virtually rendered hut, for example, you might hear the murmurs of its occupants, or the sounds of the sheep in the distance. When all these sensory elements work together, history takes an amazingly tangible form.

Some have argued that augmented reality has fallen into the “trench of disillusionment,” or, quite simply, it’s already lost its “cool” factor and is maxed out in terms of its possibilities and marketability. But for Eve, augmented reality has a strong future so long as the algorithms recognize the real world, seamlessly integrate virtual images, and stay out of the hands of advertisers. Eve wrote in a 2012 blog:

We need to get our heads down and do that hard-graft, start thinking what we can take from the hype of (augmented reality) and build it into something that works helps us during our field practice and dissemination and hopefully pushes archaeological knowledge forward, rather than just being more eye-candy.

Augmented reality is already here. People can take walking tours of cities with geo-targeted stories at certain landmarks; they can read magazines that come to life under a smartphone; they can even battle spaceships from the roof of their apartment building. But as a tool of serious research it is still in its infancy, Eve says. The expense of commercial gadgets makes them out of reach for most scholars, but the simple iPad version he's created is much more accessible. The end result, for scientists, is one of those rare technological innovations that actually brings its users closer to the real world rather than more distant. As Eve explained in a 2013 article:

The key to all of this, however, is that by using AR the real world is a canvas, and we have the ability to explore our data and our site from a body-centered perspective rather than just from sitting in our office in front of a computer screen.