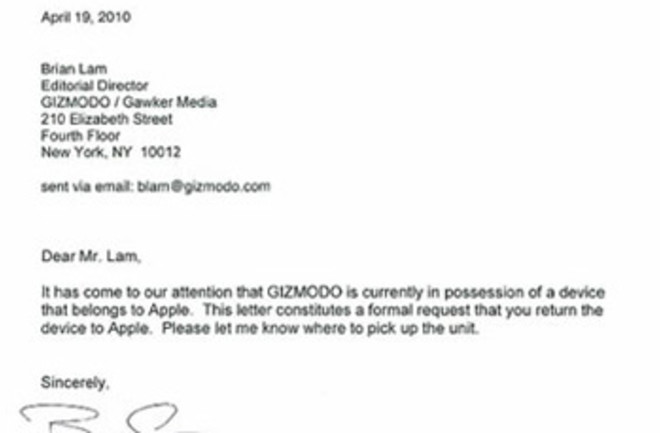 A furious Apple has sent tech website Gizmodo a terse letter demanding the return of an iPhone prototype which the site procured. The device was found on a barstool in a pub in Redwood City, California, and was sold by the finder to Gizmodo for a reported sum of $5,000. As Discoblog reported yesterday, the site immediately declared that the phone was the prototype for the 2010 model of the new iPhone 4G and wrote an in-depth article detailing all its new features. The article, accompanied by photos and video, drew an estimated 3 million viewers to the Web page in just 12 hours online. Some of those viewers must have been Apple's lawyers. In the letter dated yesterday, Apple's senior counsel wrote: "It has come to our attention that Gizmodo is in possession of a device that belongs to Apple. This letter constitutes a formal request that you return the device to Apple. Please let me know where to pick up the unit." The phone, Gizmodo revealed, was found in a bar, camouflaged to look like a regular iPhone 3GS. But when the finder switched on the device, he found that the

mobile Facebook app was logged in to the account of Gray Powell, an Apple software engineer whose last post on the social networking site was reportedly "I underestimated how good German beer is" [ABC News].

The guy who found the phone reportedly tried to get in touch with the person who lost it, to no avail. That is when the finder is reported to have started shopping the phone around; selling pictures of the phone first to Engadget and then selling the device to rival Gizmodo for $5,000. Gizmodo's subsequent blog post on the phone drew massive traffic,

That's when Apple swung into action, getting in touch with the site and asking for it to cough up the prototype. Gizmodo says it has since returned the phone to Apple on the condition that the company "take it easy on the kid who lost it." Gizmodo's editorial director Brian Lam added, "I don't think he loves anything more than Apple." For a sneak peak at the new features of Apple's next generation iPhone, go to Discoblog's post: So, a Guy Walks Into a Bar… and Discovers Apple’s Latest iPhone. Related Content: Discoblog: So, a Guy Walks Into a Bar… and Discovers Apple’s Latest iPhone 80beats: iPad Arrives—Some Worship It, Some Critique It, HP Tries to Kill It Discoblog: Apple App Store Backs Off Rejection of Pulitzer-Winning Political Cartoonist Discoblog: Is Apple Taking Sexy Back? Raunchy Apps Vanish From the App Store 80beats: Apple’s “iPad” Tablet: It’s Here, It’s Cool, and It’s Slightly Cheaper Than Expected Discoblog: Weird iPhone Apps (our growing compendium of the oddest apps out there) Image: Gizmodo

More From Discover
Mind
The Surprising Mental Health Benefits of Video Games
Technology
Phone Notifications Are Messing With Your Brain
Technology
New Technologies Are Helping Researchers Find the Hidden Graves of Holocaust Victims
Environment
Autonomous Package Deliveries May Not Reduce Emissions
Health
How the Pandemic Has Changed Our Relationship With Technology
Health
Video Game Addiction Is on the Rise. Here’s What It Looks Like
Recommendations From Our Store
My Science ShopDiscover STEM Kits
My Science ShopDiscover 2022 Calendar
My Science ShopStrange Science
My Science ShopElements Flashcards
Shop Now
Stay Curious
Join
Our List