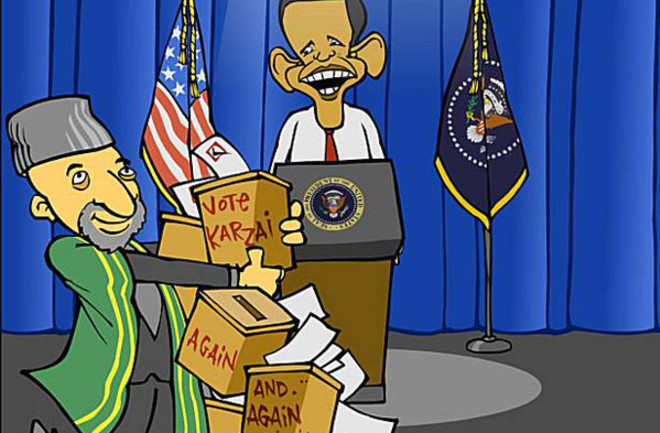 Apple has asked the political cartoonist Mark Fiore to resubmit an application for his iPhone app "NewsToons" after a controversy erupted over the company's earlier decision to reject the app. The initial rejection suggested that Apple put political satire in the same unacceptable category as pornography. Earlier this month, Fiore created history by becoming the first online-only cartoonist to win a Pulitzer for his editorial cartooning on SFGate--the San Francisco Chronicle's news Web site. While the cartoonist impressed the Pulitzer jury sufficiently to grab journalism's highest award, his work apparently didn't charm the gatekeepers at Apple's app store. In December, they rejected Fiore's bid to offer iPhone users the NewsToons app, an app based on his editorial works. In its rejection letter, Apple said Fiore’s satirical work "ridicules public figures" and was in violation of the iPhone Developer Program License Agreement, which bars any apps whose content that in “Apple’s reasonable judgment may be found objectionable, for example, materials that may be considered obscene, pornographic, or defamatory,” reports the NeimanNieman Journalism Lab. The Lab added:

However, Fiore is not the first cartoonist to be initially shunned by the app store, which seems to take a dim view of political cartoons. It initially turned down cartoonist Daryl Cagle’s application, as well as an app called Bobble Rep that used political caricatures by Tom Richmond. Both these apps were later accepted. Now, thanks to the online furor over Fiore's rejection, Apple seems to have had a change of heart. Related Content: Discoblog: Is Apple Taking Sexy Back? Raunchy Apps Vanish From the App Store 80beats: Apple’s “iPad” Tablet: It’s Here, It’s Cool, and It’s Slightly Cheaper Than Expected 80beats: 5 Buzz-Worthy Storylines from the Consumer Electronics Show 80beats: Sorry, Australian iPhone Users: You’ve Been Rickrolled Discoblog: Weird iPhone Apps (our growing compendium of the oddest apps out there) Image: Mark Fiore/SFGate