Antimatter: Coming Soon to a Warp Nacelle Near You?

Any Trekker (or Trekkie) knows that the warp drives in Federation starships are powered by dilithium-moderated matter/antimatter reactions. When matter and antimatter come into contact:  BOOM! There's a huge release of energy and the Enterprise leaps ahead at incredible speeds. Of course that's all sci-fi, right?

What fewer Trekkers, and the public in general, realize is that antimatter is not solely the purview of science fiction: it actually exists in the real Universe--it's not just a common sci-fi MacGuffin (like, say, artificial gravity)--and it's not crazy to suggest it as a possible propulsion system for futuristic spacecraft. Antimatter, in short, is the same as normal matter except with the charges flipped: protons take on a negative charge (anti-protons), and electrons reverse charge to become positrons. Our Sun creates antimatter during the proton-proton chain--the fusion reaction that generates the majority of its energy; some cosmological models even suggest that antimatter should be as common as matter in our Universe. And of course antimatter is huge in sci-fi. In one of the better TOS episodes, Spock observed that the Doomsday Machine's weapon was "...pure anti-proton..."--an antimatter particle beam.

Sci-fi generally does a good job of showing what happens when matter comes into contact with antimatter: BOOM. When particles of matter interact with their 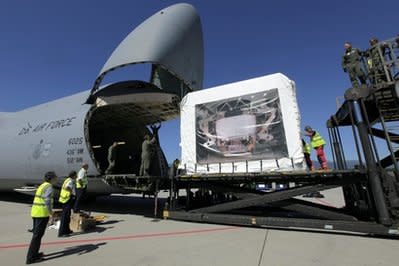 antiparticles, through the process of pair annihilation the mass of both particles is converted completely into energy--gamma rays--via the dictates of E=mc2. We still don't know if antimatter is as common as matter in the Universe; perhaps there are entire galaxies composed chiefly of antimatter, galaxies insulated from their matter counterparts by the vast distances of inter-galactic space. One of the last (permanent) residents of the International Space Station, the CERN-built Alpha Magnetic Spectrometer (at right being loaded onto a Air Force C-5 Galaxy), may help us understand how ubiquitous antimatter is in the Universe, as well as aiding scientists in determining the nature of dark matter.

So will the Alpha Magnetic Spectrometer teach us the secrets of antimatter, leading inexorably to its storage, manipulation, and use? Yes...and no. The first half of that statement is true: AMS may help physicists understand the ubiquity of antimatter and perhaps have a better grasp on the nature of our universe. Understanding the nature of antimatter as a precursor to using it? That's more of a leap. It's the kind of statement one might make in a work of science fiction to advance a plot point (trust me on this), but it makes less sense in the real world. Both producing and containing antimatter are currently way beyond our capabilities. But if scientists could design, and engineers could build, a vessel to contain antimatter, it would go a long way towards solving our planet's energy needs.

As far as a viable matter/antimatter propulsion, it turns out that NASA has, in fact, researched just that--spacecraft with antimatter-based propulsion systems.  Of course the Trekkers are keenly aware of the dangers associated with the term "containment failure", and that would be a real consideration if the antimatter had to be stored. The drives being researched by NASA would be very different from the antimatter pulse drive I wrote about previously, and would generate/use antimatter--to use a business term--on a "just in time" basis. This type of main engine would dramatically cut the travel time, and open up for exploration, to countless destinations within the Solar System. 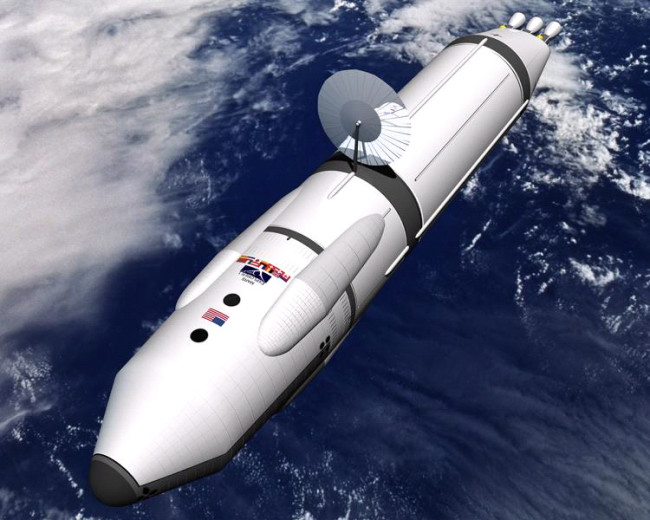 Vacations on Mars via Antimatter Express--who's coming with me?