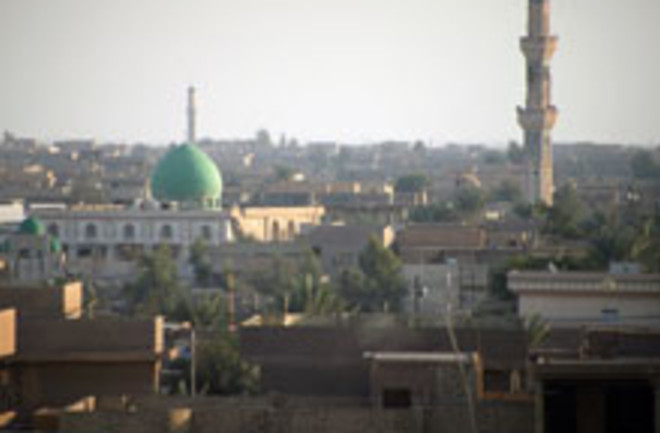 The Iraq war and its aftermath have left physical and psychic wounds on both local residents who lived through the American invasion and many U.S. soldiers. But anecdotal reports suggest that another demographic may have suffered as well: unborn babies. Doctors in Fallujah, Iraq have reported a high number of children born with birth deformities ever since the massive battle between Iraqi insurgents and U.S. forces that raged there in 2004. While no medical studies have been done or official reports have been issued, many Fallujah locals suspect that U.S. weaponry used in the assault has left a lingering effect. A debate is expected to come up in the British parliament sometime next week on the subject. The call for debate came up after the latest report by BBC's John Simpson, in which an Iraqi pediatrician said she was seeing two to three deformed babies each day; most of the children had cardiac complications. The doctor clarified that while she didn't have any official figures, she had noted an increase in the number of cases since the American invasion. The current level of cardiac birth defects in Fallujah, said the BBC, is 13 times higher than that in Europe.

In his report, Simpson also encountered children who were missing limbs, who had extra fingers and toes, with six fingers on each hand and six toes on each limb and an other child with spinal cord deformities so severe, he couldn't bear to have it filmed. Many Iraqis, says Simpson, blame American weapons for increasing birth defects in the area. At a clinic he visited, he was told

the worst problems were to be found in the neighborhood of al-Julan, near the river. This was the heart of the resistance to the Americans during the two major offensives of April and September 2004, and was hit constantly by bombs and shells [BBC].

Local people told the BBC they suspect US forces used white phosphorus and depleted uranium (DU) [in the battle of Fallujah], although this has not been proved [New Scientist]. White phosphorous can be found in

incendiary weapons but is more often used as a smokescreen, while depleted uranium, which is toxic and weakly radioactive, can be found in some armor-piercing shells.

The allegations aren't new. In a 2009 investigation, The Guardian asked pediatrician Samira Abdul Ghani to

keep precise records over a three-week period. Her records reveal that 37 babies with anomalies, many of them neural tube defects, were born during that period at Fallujah general hospital alone [The Guardian]. That report observed that Fallujah's doctors were hesitant to link the deformities with the war, and suggested that they might be wary of embarrassing the government. Instead,

"These include air pollution, radiation, chemicals, drug use during pregnancy, malnutrition, or the psychological status of the mother," said Dr Qais. "We simply don't have the answers yet" [The Guardian].