And the Survey Says: Google Is Not Making You Stupid 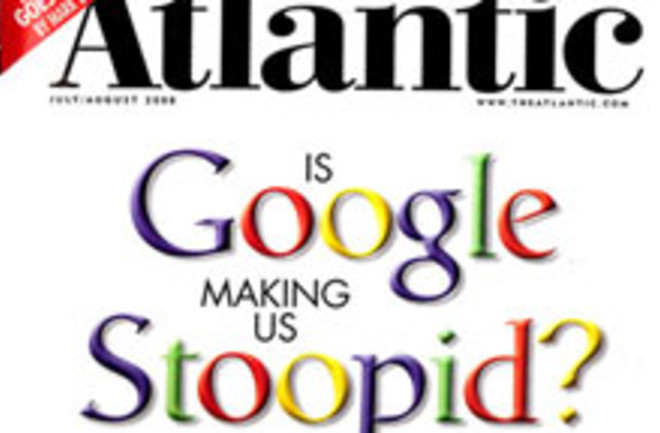 In 2008, writer Nicholas Carr worried in The Atlantic that the search engine Google and the easy availability of information on the internet is making our brains lazy--and rendering humans stupid. He wrote that the net was destroying his capacity for concentration and contemplation, adding, "Once I was a scuba diver in the sea of words. Now I zip along the surface like a guy on a Jet Ski." DISCOVER's own Carl Zimmer responded by taking the opposite stance, and declaring that Google is making us smarter. He argued that humans are "natural born cyborgs" and the internet is our "giant extended mind." He wrote that there was "nothing unnatural about relying on the internet—Google and all—for information.... Nor is there anything bad about our brains’ being altered by these new technologies, any more than there is something bad about a monkey’s brain changing as it learns how to play with a rake." Now, a new survey from the Pew Internet & American Life Project agrees with Zimmer; it found that Google is indeed making us smarter by allowing us to make better choices. More than 76 percent of the 895 experts polled said Nicholas Carr was wrong in thinking that Google made us stupid. PC Magazine reports:

"Google allows us to be more creative in approaching problems and more integrative in our thinking. We spend less time trying to recall and more time generating solutions," said Paul Jones of ibiblio.org at the University of North Carolina Chapel Hill. "For people who are readers and who are willing to explore new sources and new arguments, we can only be made better by the kinds of searches we will be able to do," wrote Oscar Gandy, a professor at the University of Pennsylvania. "Of course, the kind of Googled future that I am concerned about is the one in which my every desire is anticipated, and my every fear avoided by my guardian Google. Even then, I might not be stupid, just not terribly interesting."

Nicholas Carr meanwhile said he "felt compelled to agree with himself," telling the Pew Project:

Peter Norvig, Google's research director, argued in turn that because Google makes so much information available instantly, it's a good strategy for a knowledge-seeker to skim through many offerings first to get an overview. Then the user can settle down with the best sources for a deeper read. He added that skimming and concentrating can and should coexist. Related Content: DISCOVER: How Google Is Making Us Smarter DISCOVER: Big Picture: 5 Reasons Science [Hearts] Google DISCOVER: Google Taught Me How to Cut My Own HairImage: The Atlantic

More From Discover
Technology
Hack Forces Air-Gapped Computers to Transmit Their Own Secret Data
The Sciences
Scientist You Should Know: Monika Schleier-Smith and the Quantum Universe
Technology
Some Researchers Debate if we are Living in a Computer Simulation
Technology
How Does 3D Printing Actually Work and What Can You Make?
Technology
Why Bitcoin's Anonymity Could Soon Collapse Like A House of Cards
Technology
Worried About Your Privacy? A New Tech Could Reduce Eavesdropping on Devices
Recommendations From Our Store
My Science ShopDiscover STEM Kits
My Science ShopDiscover 2022 Calendar
My Science ShopStrange Science
My Science ShopElements Flashcards
Shop Now
Stay Curious
Join
Our List