An IBM Patent on Midair Handoffs for Delivery Drones 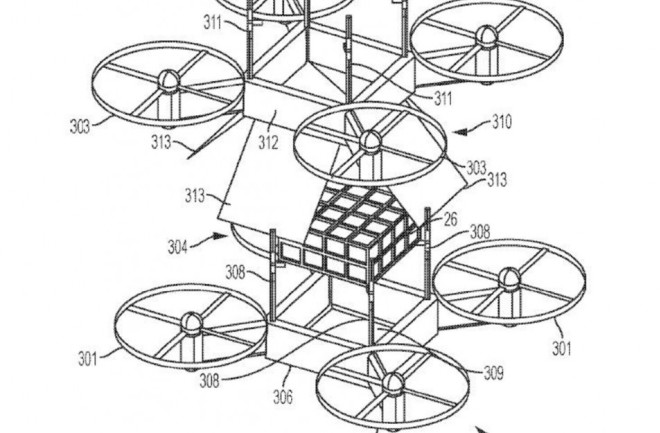 The IBM invention described in US Patent No. 9,561,852: In flight transfer of packages between delivery drones helps to extend the range of drones that are delivering packages from a warehouse to a customer's home. Credit: IBM Amazon and Google's dreams of delivery drones dropping off packages or pizza still face the problem of short delivery ranges. Most drones have limited battery life that restricts their services to less than a 10-mile delivery radius. A recently-approved IBM patent offers an unusual way to extend delivery ranges by having drones transfer packages in midair. The IBM patent envisions several possible ways for delivery drones to hand off their packages without having to land. One idea would have the drones—flying side by side—each use an arm to link up in midair and pass along the package that hangs from the arms via a strap. Imagine a purse hanging from a pole and tilting the pole one way or the other to have the bag slide in that direction, and you get the picture. Another possible method would have one drone fly above the other and slide the package down to the recipient. "We are proposing participating drones can couple with each other vertically or horizontally or [through] any other coupling combination," says Sarbajit Rakshit, IBM Master Inventor and co-inventor on the patent. "[We could] change the relative position of participating drones with each other in such a way that the payload can be transferred from one drone to another drone in a controlled manner under the influence of gravity." The IBM inventors hope to find a commercial partner willing to license and test out the invention. Rakshit says a midair handoff between delivery drones offers advantages such as avoiding the need for additional transfer stations on the ground or the risk of theft from a ground drop-off point. He also suggests that a cargo drone carrying multiple packages could act as the mothership that hands off packages to smaller delivery drones. But there's a long way to go before the IBM patent ever gets off the ground as a real-life invention. The IBM inventors have not yet tested the midair transfer idea with any flight demonstrations. Rakshit says that possible factors that need to be considered include wind speed and direction, the size and weight of different packages, and vibrations from the transfer process. To help keep the drones steady in flight, the IBM patent envisions a fluid or similar weight mechanism acting as counterbalance during the package transfer. Early delivery drone tests have focused on serving customers within smaller delivery ranges. Google has tested deliveries of Chipotle burritos to college students at Virginia Tech. The startup Flirtey has tried out 7-Eleven deliveries in the United States and Domino's Pizza deliveries in New Zealand. Amazon has begun its own limited delivery drone tests in the United Kingdom. Still, a larger delivery radius could be crucial to making drone delivery an economically viable service that can reach many more customers. With that in mind, the electric vehicle company Workhorse Group has partnered with UPS to try out delivery drones that provide "last-mile" deliveries from specially modified UPS trucks. And an Amazon patent filing proposed the truly fantastical vision of large airships serving as flying warehouses that would serve as mobile hubs for delivery drones. Some of these ideas are far more practical than the others. But it's likely that solving the delivery range issue will make the difference between success and failure for many delivery drone services.