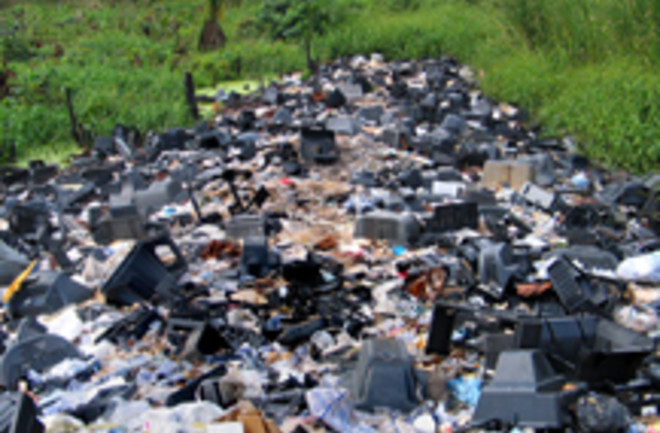 It seems that every day brings a new electronic gadget to the market, whether it's a smart phone, an electronic reader, a laptop the size and weight of a magazine, or a television the size of a wall. But each advance adds to the world's electronic waste, which is the fastest-growing component of solid waste. Much of the electronic refuse ends up in developing countries, where workers strip down the gadgets to get at the copper and other valuable metals inside, often exposing themselves to toxins in the process. Now, scientists are calling for federal regulations in the United States to stem the tide.

Although the U.S. is one the world's largest producers of electronic waste (e-waste), it is hardly a leader in addressing this problem, given that the country has "no legally enforceable federal policies requiring comprehensive recycling of e-waste or elimination of hazardous substances from electronic products," the researchers say [Scientific American].

Instead, e-waste policies are left to the states, not all of which have laws on the books. In the article, published in Science, the authors note that the United States has not

ratified the Basel Convention, which regulates the movement of hazardous wastes across international borders and has the support of 169 of the 192 United Nations member countries [Scientific American].

Electronics can contain a host of dangerous materials, from heavy metals to toxic chemicals.

Toxic e-waste shows up in forms as varied as high lead levels in the blood of children in Guiya, China, where millions of tonnes of e-waste are illegally dumped, and as fire-retardant chemicals in the eggs of California's peregrine falcons [CBC News].

More From Discover
The Sciences
Scientists Reconstruct Songs From A 150-Year-Old Bug
The Sciences
Scientist You Should Know: Monika Schleier-Smith and the Quantum Universe
Technology
Some Researchers Debate if we are Living in a Computer Simulation
Technology
How Does 3D Printing Actually Work and What Can You Make?
Technology
Worried About Your Privacy? A New Tech Could Reduce Eavesdropping on Devices
Health
Time vs. Money: Understanding and Alleviating Time Poverty
Recommendations From Our Store
My Science ShopDiscover STEM Kits
My Science ShopDiscover 2022 Calendar
My Science ShopStrange Science
My Science ShopElements Flashcards
Shop Now
Stay Curious
Join
Our List