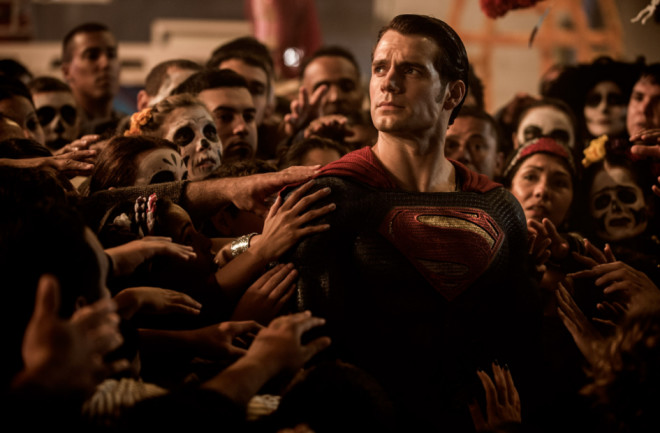 The 2016 film "Batman v Superman: Dawn of Justice" raises questions about how superhumans coexist with society. Credit: Warner Bros. Pictures Americans have long celebrated fictional superheroes with extraordinary powers such as flight, superhuman strength and incredible speed. In real life, a survey shows Americans seem wary of technologies leading to enhanced humans with better brainpower or greater athletic abilities. Many Americans worry that biomedical technologies such as gene editing, brain chip implants, and synthetic blood will increase the wealth inequality that already exists between "haves" and "have nots," according to the report by the Pew Research Center. A majority of U.S. adults said they would be worried about technologies such as gene editing, brain chip implants, and synthetic blood. A majority also said they would not want to become enhanced humans. But most also believe that such technologies will become available before they have been fully tested or understood. During related focus group sessions, some Americans even expressed fears of "superhumans" that would not be out of place in a Marvel or DC superhero film.

"[M]any said they fear how human enhancement technologies in the wrong hands could be used for the purpose of eugenics, to create “superhumans” who might impose their will on others. One man thinking about the synthetic blood scenario put it this way: It could be “used to make supermen … almost like super-physical men.” Another added that those who got the enhancements “could probably get away with anything and nobody could stop [them].”

The Powers of Enhanced Humans

None of the biomedical technologies considered by the Pew Research Center report would turn ordinary people into the equivalent of Superman. But they could each confer undeniable advantages to certain individuals. For example, gene editing technology could "give a healthy baby a much reduced risk of serious diseases and conditions over their lifetime." This is already fast becoming a reality: Chinese researchers have already experimented with making human embryos resistant to the HIV virus and modifying genes linked to a blood disease. Researchers and bioethics experts have spent years debating how such technology could not only improve general health but also lead to "designer babies" with enhanced human capabilities. But the Pew Research Center focused on gene editing mainly as a tool for reducing the dangers of disease.

A Pew Research Center report finds half or more of public says they would not want these enhancements. Credit: Pew Research Center Brain chip implants already exist for the purpose of helping people with clinical depression and even allowing paralyzed patients to recover some use of their limbs. The Pew Research Center report took a step farther beyond these real cases of brain implants helping people with medical issues. It envisioned future versions of such "computer chip in the brain" technology creating enhanced humans by giving "a healthy person a much improved ability to concentrate and process information." Synthetic blood substitutes are currently being developed to ease shortages of blood donations needed for life-saving transfusions. Pew Research Center asked its survey respondents to consider future versions of synthetic blood technology that could boost oxygen levels in the bloodstream and help improve physical speed, strength and stamina. Such advantages could prove a boon for both Olympic athletes and people going about their everyday activities. More Americans seemed skeptical of such technologies rather than optimistic, especially in the cases of brain chip implants and synthetic blood. But they were split almost evenly on the question of using gene editing to prevent diseases in their babies. In addition, 36 percent of Americans said gene editing would have more benefits than downsides for society, whereas 28 percent said it would have more downsides than benefits.

The Pew Research Center report did not just focus on futuristic versions of enhanced human technologies. For comparison, it also asked people about existing enhancement procedures such as electric cosmetic surgery, laser eye surgery, skin or lip injections, cosmetic dental procedures, hair replacement surgery, or vasectomy/tubal ligation procedures as birth control. The results showed some intriguing differences in people's responses depending on levels of education and income. Overall, most Americans said these existing enhancement procedures were an "appropriate use of technology." Even in the most controversial case of skin or lip injections, a 53 percent majority still said it was appropriate versus 43 percent that deemed it inappropriate. By comparison, technologies such as laser eye surgery and cosmetic dental procedures for smile were deemed appropriate by large majorities of 89 percent and 86 percent, respectively.

Marvel superheroes from the 2016 film "Captain America: Civil War." Credit: Marvel Entertainment But responses differed more greatly when the survey took respondents' level of education and income into account. The Americans with higher levels of education and income tended to favor use of modern technologies as appropriate. On the other side, Americans with lower levels of education and income tended to look down on such enhancement procedures—perhaps because many lack access to such technologies. It's possible that a similar split in attitudes between the "haves" and "have nots" could also arise when futuristic versions of brain chip implants and synthetic blood become a reality.

Looking to the Future of Inequality

Surprisingly, the current survey found that most Americans have similar attitudes toward the question of inequality and futuristic technologies regardless of education or income levels. Overall, Americans also generally see future social inequality being related to unequal access to enhanced human technologies. Americans may worry about science and technology creating greater societal rifts due to social inequality, but they still seem mostly positive toward science and technology. The survey shows that 67 percent see science as a net positive for society versus 27 percent that see it as equally positive and negative. Just four percent say science has had mostly negative effects on society. People seemed less overwhelmingly positive in their views on technology, but a slight majority of 52 percent still said they view technology as a net positive. Another 38 percent see technology as equally positive and negative. And eight percent see technology as mostly negative. There is much more to consider in the full Pew Research Center report, so check it out if you have the time. But even if you don't read the full report, you might want to start thinking about your own views on enhanced humans the next time you catch a superhero film that features "metahumans" such as "Captain America: Civil War," "Batman v Superman: Dawn of Justice," or "Suicide Squad."